The frenzy has died down but there were still a few newsworthy headlines over the past seven days which are headlined in our top stories of the week.

Cullen Retires: As expected, veteran center Matt Cullen has decided to call it a career.  The 42-year-old spent last season with Pittsburgh as a regular on their fourth line and held his own.  However, while he could still probably hold his own in a similar role, he’s moving on to his post-hockey days.  Cullen wound up playing with eight different teams over his 21-year NHL career, recording a respectable 731 points.  He cracked the 1,500 games played mark late in 2018-19 and his 1,516 career regular season games played put him 19th in that category in NHL history.

Labanc Puzzler: The fact that the Sharks re-signed winger Kevin Labanc should come as no surprise.  He’s an emerging key part of their attack and is coming off of a 56-point season.  The surprise is that he only signed a one-year, $1MM contract, a deal that is well below market value.  It’s true that he didn’t have salary arbitration eligibility which didn’t help but still, that’s a serious underpay.  It gives San Jose some extra flexibility to work with this summer as they look to fill out the rest of their roster (likely including a new contract for veteran center Joe Thornton).  There has been plenty of speculation already that he’ll be rewarded for taking one for the team when he’s eligible to sign a contract extension in January. 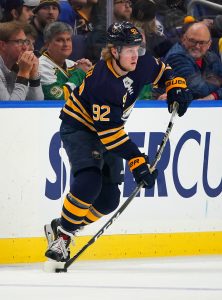 Sabres-Blackhawks Swap: Although Henri Jokiharju cracked Chicago’s roster to start last season, he didn’t get much of a chance in the second half and was frequently speculated as trade bait.  A trade ultimately came to fruition as the defenseman was dealt to Buffalo for winger Alexander Nylander in a swap of first-round prospects.  Nylander is coming off of his best season in the minors and the Blackhawks are hoping that a change of scenery will help unlock his offensive potential.  Meanwhile, the Sabres add another quality young right-shot blueliner to the mix and in doing so, they have ultimately increased the trade speculation around Rasmus Ristolainen as GM Jason Botterill has now brought in three notable righties over the past few months.

UFA Winger Deals: Two of the top wingers left on the open market have found new homes.  Micheal Ferland signed a four-year, $14MM deal with Vancouver.  The $3.5MM AAV is certainly a reasonable price tag for a player with back-to-back 40-point seasons but the addition has created a bit of a cap crunch with Brock Boeser and Nikolay Goldobin still needing new deals.  Meanwhile, Carolina wasted little time replacing Ferland as they inked Ryan Dzingel to a two-year, $6.75MM pact.  He had a career year offensively with 56 points but his struggles upon being traded to Columbus certainly lowered his market value.

Binnington Re-Signs: With his rather limited NHL track record but a Stanley Cup under his belt, Jordan Binnington’s restricted free agency case was going to be one of the more interesting ones to follow in the coming weeks.  However, it won’t make it to salary arbitration as the Blues handed the 25-year-old a two-year, $8.8MM contract.  Notably, his deal comes in slightly higher than Jake Allen’s $4.35MM AAV.  Both netminders are signed for two years and will be unrestricted free agents after that.