Free agency is now just a couple of weeks away from opening up and there are quite a few prominent players set to hit the open market while many teams have key restricted free agents to re-sign.  The Capitals already put pen to paper with one of their free agents of note but they still have several players in need of new deals.  Here’s a closer look at their free agent situation.

Notable Restricted Free Agents: F Jakub Vrana – After a relatively quiet sophomore season, Vrana was much-improved in 2018-19 and took several strides towards locking down a spot in Washington’s top six on a more permanent basis.  GM Brian MacLellan has indicated that he’s open to signing the 23-year-old to a long-term contract but that may be a tricky one to navigate between their salary cap situation and a lack of track record as a scorer in the NHL.  A bridge deal of two or three years would ease their cap burden a little bit and give them more time to evaluate Vrana’s long-term fit with the franchise.

F Andre Burakovsky – A few years ago, he looked like a future top-six piece (not unlike Vrana’s situation now).  However, his development and production have plateaued and he actually took a step back this past season and found himself on the fourth line quite frequently in the second half.  At 24, there’s still some cause for optimism that Burakovsky could turn things around but his qualifying offer of $3.25MM makes that a risky proposition due to their limited cap space.  All options are on the table at this point but it wouldn’t be surprising to see the Capitals try to convince him to sign below his qualifier or try to find a team that’s willing to pay him that and deal his rights around the draft. 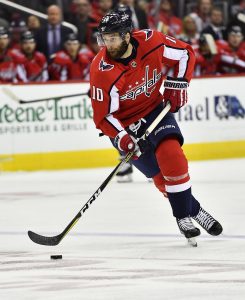 Notable Unrestricted Free Agents: F Brett Connolly – After showing flashes of his potential over the first several years of his career, the 27-year-old started to put everything together with more consistency this past season.  He blew past his previous career high in points (27) by picking up 22 goals and 24 assists on the year and most importantly, he did so almost exclusively at even strength; just two of his 46 points were on special teams.  It’s also worth noting that he averaged just 13:20 of ice time per night which is low for someone with that type of production.  Secondary scoring is always something teams try to find in free agency and the fact that Connolly just showed that he can produce at five-on-five with limited minutes is going to make him a popular target next month.

D Brooks Orpik – His second go-around with the team came just after his first one ended after Washington dealt him to Colorado.  The Avalanche bought him out and Orpik returned to the Caps.  His role was a lot different in 2018-19, however.  Instead of being a fixture in their top four most nights, Orpik was relegated to more of a depth role.  He’ll turn 39 next month so, at this stage of his career, he’s going to be going year to year on his contracts.  It doesn’t seem likely that he’ll be back in Washington but a team looking for veteran depth could come calling as the summer goes along.

Projected Cap Space: Right now, Washington has a little over $72.2MM tied up in 17 players for next season, per CapFriendly.  With the Upper Limit now being projected to be a little lower than anticipated, that’s going to leave MacLellan with less than $10MM to round out the roster.  Vrana’s going to take up a fair-sized chunk of that even on a short-term deal while if Burakovsky sticks around, their cap room will drop quite a bit again.  Accordingly, expect them to be shopping for bargains in free agency, players that are willing to take a bit less to play on what they believe can still be a Cup-contending team.