Free agency is now less than a month away from opening up and there are quite a few prominent players set to hit the open market while many teams have key restricted free agents to re-sign.  The Penguins have their core already under contract but will have some work to do to fill out the end of their roster.  Here’s a closer look at their free agent situation. 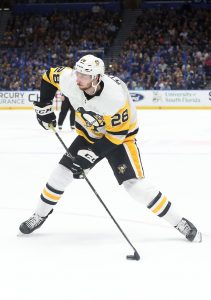 Key Restricted Free Agents: D Marcus Pettersson – After being a depth piece with Anaheim, Pettersson stepped into a larger role upon his early-season acquisition and really established himself as a capable blueliner.  He also showed a bit of offensive upside, something that hadn’t been all that prevalent dating back to his time in Sweden.  Pettersson’s emergence helped pave the way for the Penguins to deal Jamie Oleksiak back to Dallas later on in the season as well as move Olli Maatta to Chicago this past weekend.  He doesn’t have arbitration rights and thus doesn’t have a lot of leverage so between that and their salary cap situation, expect a short-term bridge deal with the hopes that he’ll outperform it.

F Zach Aston-Reese – One of the top college free agents in the 2017 class, Aston-Reese began to establish himself as a regular in the second half of the season while also suiting up in all four games in the postseason.  At this point, the 24-year-old is likely to see a lot of time on the fourth line though he is capable enough offensively to move up if injuries arise.  Even though he is arbitration-eligible, players like this without much of a track record at the NHL level don’t tend to get big raises so a one-year contract near his qualifying offer (just over $874K) is likely what he’ll wind up with.

Key Unrestricted Free Agents: F Matt Cullen – His second go-round with Pittsburgh wasn’t as successful as his first but Cullen still provided some contributions to the fourth line.  He was their second-best option at the faceoff dot while he chipped in on the penalty kill and added a respectable 20 points.  For the league minimum salary, that was pretty good bang for their buck.  However, Cullen turns 43 in November and at some point, they’ll need to try a younger player in that role.  The time for that change is probably this summer.

F Garrett Wilson – The 28-year-old got his first taste of extended NHL action, getting into 50 games with the Penguins after playing just 34 in the seasons leading up to that.  He was limited to a spot on the fourth line despite some impressive numbers in the early going with Wilkes-Barre/Scranton (18 points in 18 games).  He could get a look from more than just Pittsburgh this summer but every offer is likely to be around the league minimum.

Projected Cap Space: As is almost always the case, cap space is at a premium for the Penguins.  They have over $76.6MM committed for next season already, per CapFriendly and several spots still to fill on the roster.  They can do that with contracts that are close to the league minimum but if they want to add another impact player, they’ll need to free up some cap room first.