Free agency is now less than a month away from opening up and there are quite a few prominent players set to hit the open market while many teams have key restricted free agents to re-sign.  Carolina doesn’t have a large number of players to re-sign but of the ones in need of new deals, there are quite a few notable ones.  Here’s a closer look at their free agent situation. 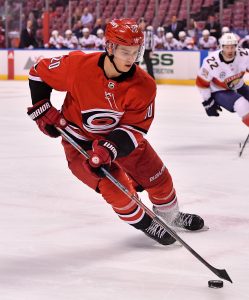 Key Restricted Free Agents: F Sebastian Aho – He’s one of the players that are part of the high-end class of RFAs that are coming off their entry-level deals this summer.  Not only did Aho take a big step forward offensively as he hit the point-per-game mark for the first time, he did so while transitioning to playing center, a more difficult position compared to the wing.  While his numbers dipped a bit in the postseason, he wound up leading the Hurricanes in scoring there as well.  While Aho isn’t eligible for salary arbitration, he has certainly positioned himself extremely well to get a significant raise this summer.  It won’t be a question of if he’ll be their highest-paid player but rather by how much.

F Brock McGinn – The 25-year-old saw his numbers dip slightly but still played an important role in Carolina’s bottom six in terms of playing with physicality and chipping in with some secondary scoring; he actually saw his point-per-game average go up slightly in the postseason.  After being on a cheap two-year bridge deal, McGinn should at least double his previous AAV of just under $890K.  Unlike Aho, he is eligible for salary arbitration.

Key Unrestricted Free Agents: F Micheal Ferland – After a surprisingly strong season in Calgary the year before, Ferland was able to match those numbers in his first season with the Hurricanes despite a drop in ice time.  His grit and physicality (along with his age – 27) make him arguably the best pure power forward that’s going to be available on the open market so he is going to be highly sought after next month.  After making $1.8MM in 2018-19, he could be looking to triple that on his next contract.

G Curtis McElhinney and Petr Mrazek – The two have basically been linked together since they became a surprisingly-strong goalie tandem at the beginning of the season.  However, both are in very different situations.  McElhinney is 36 and is probably his last shot at a multi-year deal.  Moving forward, teams interested in him will be solely viewing him as a backup even though he handled a larger workload than that.  Mrazek is only 27 and has some more options.  He’ll likely be seeking a deal where he at least has a path to the number one job and unlike last summer, a multi-year deal is now likely to happen.

F Justin Williams – He may be 37 but Williams has shown no signs of slowing down.  His 53 points this past season were actually his highest since 2011-12 although he was a little quieter than usual in the postseason.  His situation is a little different as it’s believed that if he decides that he wants to return next season, it will only be with the Hurricanes which doesn’t exactly help his market value.  The captain had an AAV of $4.5MM the last two years and if he does return, his next contract will likely check in at that amount once again.

Projected Cap Space: As things stand, Carolina has committed a little over $54MM to 14 players for next season, per CapFriendly.  Basically, they have more than enough room under the Upper Limit to bring all their players back if they so desire.  How high of an increase to the budget that owner Tom Dundon is willing to approve will ultimately determine their offseason spending.