The Buffalo Sabres have acquired defenseman Colin Miller from the Vegas Golden Knights in exchange for a 2021 second-round pick (originally from St. Louis) and a 2022 fifth-round pick. Miller has three years remaining on his contract with a $3.875MM cap hit. 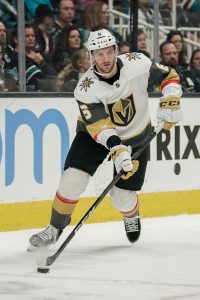 As the Golden Knights continue to try and get under the salary cap the 27-year old defenseman was the next likely candidate to be moved out after they traded Erik Haula earlier this week. That’s not necessarily because of his play though, as Miller has played quite well since arriving in Vegas through the expansion draft. In 147 games with the team he recorded 70 points, often from a booming slap shot either going straight in or providing rebound opportunities for his teammates. Originally a fifth-round pick in 2012 by the Los Angeles Kings, Miller’s ascension to legitimate top-four ability has been slow and steady but may receive its best opportunity in Buffalo.

Miller may well get a chance to play with Rasmus Dahlin next season as the young phenom continues his transition to a star in the NHL. Rasmus Ristolainen, Brandon Montour, Zach Bogosian and Casey Nelson all represent other right-handed options, meaning another move may be soon to follow for Buffalo GM Jason Botterill. For now though, their group already looks much improved from the one that started last season.

Vegas meanwhile will take the picks and run, happy to have gotten something in return for another cap dump. The team has young defensemen in Zach Whitecloud and Nicolas Hague pushing for an NHL opportunity, and could already probably afford to give Nate Schmidt even more responsibility. The question will be whether they bring back (or can even afford to bring back) veteran Deryk Engelland for another season, or just fill the remaining blue line minutes internally.

If this is the precursor to another move by the Sabres, they could be holding court in the next few days. The free agent defenseman market is razor thin (especially on the right side) and has already led several teams to pursue trade acquisitions instead. Miller joins a group of defensemen including Jacob Trouba, Matt Niskanen, Justin Braun, Radko Gudas, Olli Maatta, Calvin de Haan, Kevin Connauton, Gustav Forsling and of course P.K. Subban to be traded over just the last couple of weeks.

Renaud Lavoie of TVA Sports was first to report a deal was close, while Bob McKenzie of TSN reported the details of the return.