Detroit Red Wings and Toronto Maple Leafs legend Red Kelly has passed away at the age of 91. The Kelly family released a statement through the Red Wings:

Red was a devoted husband and caring father and grandfather and was tremendously proud of his many hockey accomplishments. He was very moved by decades of love and support from Red Wings fans and was humbled to have his jersey retired earlier this year. We are comforted in knowing that he impacted so many people both at and away from the rink and know that his life will be celebrated. 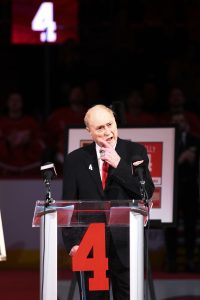 The entire Toronto Maple Leafs organization mourns the passing of Red Kelly. For those of us who were lucky enough to have known or encountered Red, we will all miss his sharp mind and keen intellect. He was a gentle man but a fierce competitor. Above all, he was a family man, and he will be missed by his hockey family. Our deepest sympathies go out to Andra, their children, grandchildren and the entire Kelly family.

There have been few players in the history of professional hockey to achieve the success Kelly did on the ice. A defenseman for the Red Wings starting in 1947, Kelly was almost immediately recognized as one of the best players in the game. He received votes for the Hart Trophy as the league’s most valuable player in just his third season, and would win the first of four Lady Byng trophies in his fourth. The exceptional two-way player would hoist the Stanley Cup four times with the Red Wings, only to see his career take a sharp turn later on.

After a dispute with the Red Wings ended in a nixed trade to the New York Rangers and a brief retirement for Kelly, he would end up getting a call from the Maple Leafs. A famous meeting between Kelly and Toronto coach Punch Imlach resulted in the defenseman changing positions and becoming a center, in order to check Jean Beliveau of the Montreal Canadiens. Kelly would find immediate success with the Maple Leafs, and helped them to four more Stanley Cup victories over the years. The final time came on May 2, 1967, exactly 52 years ago today. The Maple Leafs have still not raised the Cup again.

Kelly’s No. 4 was raised to the Detroit rafters earlier this season, retired by the Red Wings. The Maple Leafs did the same, making Kelly one of 17 players to see their numbers retired in a 2016 ceremony. Both franchises were completely changed by Kelly’s presence on the ice, and he will never be forgotten by fans around the hockey world.