It has been a relatively quiet day on the trade front so far but the Sabres and Ducks have made a notable swap as Buffalo has acquired defenseman Brandon Montour from Anaheim in exchange for blueline prospect Brendan Guhle and a first-round pick.  The Ducks will have the choice of the better of the first rounders of the Blues and Sharks which the Sabres had acquired in previous deals. 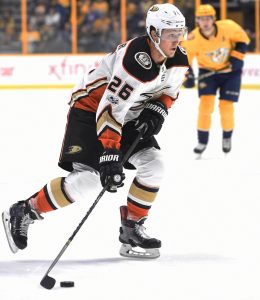 Montour is in his second full season at the NHL level and has played a significant role for the Ducks this season, logging over 22 minutes a night on their back end which ranks third behind only Cam Fowler and Hampus Lindholm.  He hasn’t been the most productive offensively though (an issue for pretty much everyone on Anaheim) with just 25 points (5-20-25) in 62 games but is still a more-than-capable top-four defenseman.

The 24-year-old is in the first season of a two-year, $6.775MM bridge deal that was signed in late July.  The contract is slightly backloaded and carries a $3.525MM salary next season which will also represent his qualifying offer in the 2020 offseason when he will also have arbitration eligibility.

Meanwhile, in Guhle, Anaheim adds another young defender to their stable.  The 21-year-old actually made his NHL debut as a 19-year-old when he was summoned from the WHL as an emergency recall for three games.  However, he has spent the bulk of his professional career at the minor league level and has played in 50 games with Buffalo’s AHL affiliate in Rochester this season, collecting 27 points (5-22-27).  He has suited up a total of 23 times with the Sabres over parts of three years, picking up five assists while logging just over 17 minutes a night.  He has two years remaining on his entry-level deal with an AAV of just under $700K.

Buffalo GM Jason Botterill had indicated previously that he wasn’t interested in dealing a first-round pick for a rental player but might be open to doing so for someone that will be around longer.  That is indeed the case here as Montour has three years of team control remaining after this one.  As for Anaheim, they free up some much-needed salary cap flexibility for the next couple of seasons although it comes at the cost of someone that looked like a part of their long-term future just a short while ago.