The Los Angeles Kings are incredibly not out of the wild card race in the Western Conference, but that isn’t because of any real turnaround. The team is still in last place with a 23-30-6 record and have lost five consecutive games, leading to more speculation about trade assets on the roster. The team has already traded Tanner Pearson, Nate Thompson and Jake Muzzin this year and have several others who might draw calls from around the league as Monday’s deadline approaches. 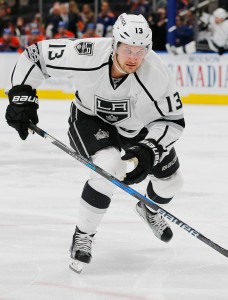 One of those who is already generating interest is Kyle Clifford, according to NHL Network correspondent Dennis Bernstein and LA Kings Insider Jon Rosen. Both reporters note however that the Kings may not be jumping to move Clifford, who is having an excellent season by his standards and is one of the team’s locker room leaders.

The 28-year old looks like he will shatter his previous career-high of 15 points as he now has 13 through 49 games this season. It’s his physicality and leadership, not offense, that teams would be acquiring him for though, as Clifford has never been more than a bottom-six player that gets between 9-11 minutes a night. The heavy winger could add some experience to any fourth line in the league, given his two Stanley Cups with the Kings and 55 playoff games overall.

Clifford also only carries a $1.6MM cap hit this season and next, making it easy to understand why the Kings would hesitate to move him. It’s unlikely he would bring back a huge return, meaning his veteran presence may be worth more to them as they try to turn things around and install the next wave of young talent in 2019-20.