Whatever hope that was left for Rick Nash to continue his playing career with a late-season contract can be extinguished, as Darren Dreger of TSN relays a message from agent Joe Resnick:

Due to unresolved issues/symptoms from the concussion sustained last March, Rick Nash will be forced to retire from the game of hockey. Under the advice of his medical team, the risk of further brain injury is far too great if Rick returns to play. Rick would like to thank everyone who has supported him during this difficult time period.

Dreger adds that Toronto, San Jose, Columbus, Boston and Pittsburgh had all checked in on Nash as a potential addition, though they can obviously all now cross him off any list. The 34-year old forward will finish his career with 437 goals and 805 points in 1,060 regular season games, but was never able to lift that elusive Stanley Cup. He unfortunately suffered his latest head injury when chasing that dream with the Boston Bruins, a team that traded a large package of assets to get his unique skill set.

It was a unique skill set indeed for the 2002 first overall pick. The 6’4″ winger at his best was a freight train on skates, moving faster than almost anyone on the ice and using his exceptionally long reach to slide pucks around defensemen and goaltenders alike. Developed into a top defensive player along with his elite offensive upside, Nash received Selke votes three times in his career. He would also receive Hart Trophy votes on three occasions, though the only individual trophy he collected was a Maurice Richard award for leading the league in goals as a 19-year old sophomore. 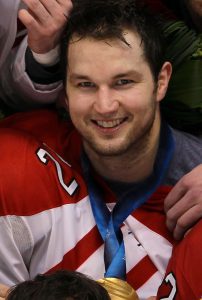 While he didn’t ever lift the Stanley Cup, it would be foolish to think that Nash couldn’t contribute to team success. A two-time Olympic gold medalist, he took part in the tournament three times for Canada over the years. His versatility in that tournament often led to him being part of a checking line that was tasked with shutting down some of the best players in the world, though in 2010 he still recorded five points in seven games.

Nash was also a three-time medalist at the World Championship, captaining Canada in his final appearance at the tournament in 2011. The “C” is something he had also worn for the Columbus Blue Jackets for several years, as the team’s first franchise player. He introduced NHL hockey to the Columbus fan base as a teenage phenom and provided them with highlight after highlight throughout the years.

The second part of his career was spent with the New York Rangers, where he once again found his scoring touch and put up a 42-goal season for the team in 2014-15. He is one of only 12 players to have ever scored at least 42 goals in a single season for the Rangers, and should be remembered well even if he wasn’t able to get the team to a championship.

The Brampton, Ontario-born Nash has always been extremely dedicated to his family, and this decision is just more proof of that dedication. While there is certainly more successful hockey in his body, taking care of his brain is the obvious choice. He’ll be remembered as one of the greatest goal scoring talents of his generation, and one that helped the Blue Jackets establish themselves as a fixture in the NHL.