After exiting Friday night’s game following a bit hit from Brayden Schenn, Nashville Predators forward Kyle Turris has been placed on injured reserve. The team has recalled Rocco Grimaldi from the AHL in his place. Turris will be forced to miss at least the next three Predators games, though no update has been given on his timeline. 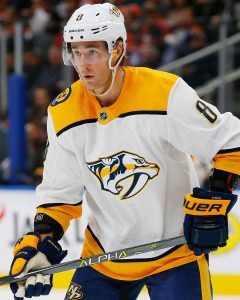 The Predators were dismantled by the St. Louis Blues in Friday’s game, with Juuse Saros allowing five goals on 15 shots before giving up the net. Nashville will be looking to get back into the win column tonight when they welcome in the Anaheim Ducks, but will now have to do it without another one of their top players. The team is already missing Viktor Arvidsson and P.K. Subban, meaning they’ll have to rely on some of their other talents to carry them through the next little while.

Up front, even more responsibility will likely be heaped onto the shoulders of Nick Bonino, who has been a stalwart defensive presence fr the team but has just three goals and nine points on the year. The 30-year old forward hasn’t had quite the impact that was expected when he signed a four-year $16.4MM deal in 2017 but will get an opportunity to show he can step into an offensive role while Turris is out. Colton Sissons has also seen his role increased recently, playing a season-high 20:19 just a few days ago against the Los Angeles Kings.

Grimaldi meanwhile has played six games for the Predators this season but has just one goal to show for it, instead doing most of his damage at the minor league level. The 25-year old forward has been used in spot duty throughout his career, suiting up just 43 times since signing out of the University of North Dakota in 2014. An extremely talented offensive player, Grimaldi is held back—or perhaps overlooked—at times due to his small 5’6″ frame.