When the Montreal Canadiens placed Karl Alzner on waivers this week there was little chance that he would be claimed. With a hefty contract that carries a $4.625MM cap hit—or $3.6MM when buried in the minors—through the 2021-22 season, it’s hard to imagine anyone picking up the tab and taking him off the Canadiens hands. In fact, his demotion to the minor leagues threatened the future of his NHL career given that Montreal had obviously moved on with younger, cheaper options on the blue line. Now, as if knowing that he has little chance of climbing back up to the top league, Alzner and his representation have been given permission to speak to other teams and seek a trade according to Pierre LeBrun on the latest edition of Insider Trading for TSN. 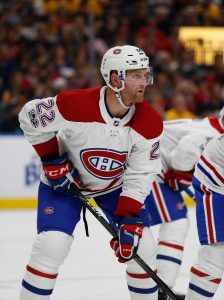 There is obviously always the chance that the Canadiens themselves find a need for Alzner, should injury or inconsistency plague their current group. The team doesn’t desperately need the cap discount they receive by keeping the 30-year old defenseman in the minor leagues, but does have a back log of players who are all eligible for waivers and would likely run the risk of getting claimed. That’s why Alzner was the odd man out in the first place, and why finding a trade partner isn’t necessarily a top priority for GM Marc Bergevin. Why not keep a veteran option in the minor leagues while you develop the rest of your group?

Still, it’s easy to understand why Alzner would want out. The former Washington Capitals defenseman reached unrestricted free agency in 2017 and signed a five-year deal with the Canadiens, only to watch his friends and teammates go on to win the Stanley Cup without him. He’d been with that group for nearly a decade, and hadn’t missed a single game since becoming a full-time NHL player in 2010. After suiting up for all 82 games in his first season with Montreal, Alzner was a healthy scratch on opening night this year and played just eight games with the Canadiens before hitting waivers.

It’s hard for any NHL player to accept an assignment to the minor leagues, but for one who hadn’t even missed a game in years the demotion is likely even tougher. Alzner obviously wants to play still, but any deal will likely have to include salary coming back to the Canadiens to even things out. Those deals are always the toughest to make, meaning his NHL future may still be extremely limited.