Luca Sbisa’s tryout with the Islanders was a successful one as the team announced that they have signed the defenseman to a one-year contract.  Sportsnet’s Elliotte Friedman reports (Twitter link) that the deal is worth $1.5MM. 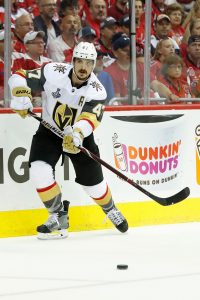 The 28-year-old spent last season with Vegas but injury trouble limited him to just 30 regular season games.  He did fare relatively well in those contests, however, collecting 14 points (the second-best point total of his career) while logging over 19 minutes of ice time per game.  His role was more limited in the postseason though as he averaged just 16:07 of playing time in a dozen playoff games.  Even though Vegas is without RFA Shea Theodore and Nate Schmidt (suspension), a reunion with the Golden Knights wasn’t in the cards.

Over his career, Sbisa has played in 495 regular season games between the Flyers, Ducks, Canucks, and Golden Knights, recording 18 goals and 84 assists along with 344 PIMS.

The Islanders lost some defensive depth on the left side with the departure of Calvin de Haan to Carolina as well as their decision to not retain midseason acquisition Brandon Davidson.  As a result, Sbisa could push to be their number six defender when the season gets underway less than two weeks from now.  If he fails to do so, he’ll at least be a capable injury replacement while being one of their more experienced rearguards (only two of their defensemen have more NHL games played than Sbisa does).