The San Jose Sharks missed out on several of their trade targets this offseason, but will come out with arguably the best available player. Ottawa Senators captain and superstar defenseman Erik Karlsson has been traded to the Sharks. In exchange the Senators will receive a 2020 first-round pick, a 2019 second-round pick, Chris Tierney, Josh Norris, Rudolfs Balcers and Dylan DeMelo. The Senators will also receive a 2021 second-round pick if Karlsson re-signs with the Sharks and an additional first-round pick no later than 2022 if the Sharks trade Karlsson back to an Eastern Conference team. That 2021 second would also upgrade to a first if San Jose reaches the Stanley Cup Final next season. Francis Perron will also be going to the Sharks with Karlsson. 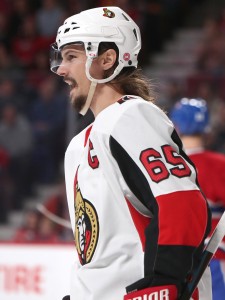 After months of speculation and rumor, the Senators have finally moved Karlsson to the highest bidder. The deal does not come with a pre-arranged contract extension, but will avoid the distraction of Karlsson suiting up for the first on-ice session of training camp tomorrow. The 28-year old defenseman did however finally address the media, and made it clear that he and his family will be living in Ottawa for the rest of his life despite the trade. Karlsson explained that he had at one point believed that he would spend his entire career in Ottawa, and was fighting back tears as he said goodbye to the room full of media.

For San Jose, the acquisition of Karlsson immediately jumps their defense group to one of the best in the NHL. Already loaded with talent like Brent Burns and Marc-Edouard Vlasic, the team can now match just about any line in the league with a pair of defenders capable of driving play. That’s very important in the Pacific Division, where several teams were all competing for playoff spots without any real standout contenders. The Sharks have now become that expected favorite for the division, and should rival the Nashville Predators and Winnipeg Jets in the Western Conference. That’s assuming that Karlsson can quickly become assimilated into the group and is fully recovered from the ankle injury that derailed the first part of the 2017-18 season.

In a league where good right-handed defensemen are rare, Karlsson and Burns are arguably—along with Drew Doughty—two of the top three options in the NHL. At both even-strength and on the powerplay, the Sharks should be incredibly dangerous and haven’t given up a ton from their current roster.

Tierney, 24, is the biggest NHL piece and should help a Senators forward group that is expected to struggle offensively. Last season playing down in the lineup, Tierney recorded 17 goals and 40 points and just started to show what he was capable of. The two-way center was selected 55th-overall in 2012, and hadn’t cracked 15 goals or 30 points in his previous seasons. In Ottawa, there is a good chance that he could be given a much bigger opportunity—especially given the news that Jean-Gabriel Pageau could miss significant time—and take on some real responsibility in the top six.

DeMelo too should see increased playing time in Ottawa after his solid 2017-18 season in San Jose. Exposed to the expansion draft but passed over by the Vegas Golden Knights, he played in a career high 63 games with the Sharks and recorded 20 points in limited minutes. That total would have been good for third on the Senators last year behind only Karlsson and Thomas Chabot, meaning there’s a very real chance that DeMelo sees powerplay time and a big jump in ice time. Whether he can parlay that into improved production is unclear, especially when moving to an Atlantic Division that has some of the league’s best forward lines.

Though Tierney and DeMelo will likely both play significant roles on the Senators this season, it is in Norris and Balcers that the trade value really lies. The former was selected in the first round in 2017 and had a very good freshman season at the University of Michigan, while the latter turned in an outstanding rookie year in the AHL and could potentially make the jump to the NHL right away. Balcers scored 48 points in 67 games for the San Jose Barracuda, proving that he is worth much more than the fifth-round selection the Sharks used to get him in 2015.

Norris isn’t currently signed and poses some risk as a collegiate prospect, but given that he is best friends with new Senators prospect Brady Tkachuk and still only entering his sophomore season there’s still little doubt that he will eventually be signed to his entry-level deal. His development will be an absolute key to this trade providing much value for the Senators, as some have projected Norris as a legitimate two-way force at center ice.

While the Senators did get some real value, it’s hard to not be ecstatic if you are a fan of the San Jose Sharks. The team has added one of the very best players in the entire world and can now legitimately say they are a Stanley Cup contender going into 2018-19. Getting Karlsson signed to a contract extension is a real must given that they’ve almost completely rid themselves of high draft picks the next few seasons—the team still owes the Buffalo Sabres their 2019 first for re-signing Evander Kane—but at this point GM Doug Wilson has decided to “go for it” while Burns, Joe Thornton and Joe Pavelski are still capable players.

One important thing to note following this trade is the position of the Colorado Avalanche, who own the Senators first-round pick for this season. With Karlsson gone and Mark Stone and Matt Duchene possibly following at some point, many are expecting the Senators to end the season near the very bottom of the standings. The Senators recently decided to keep their 2018 fourth overall pick and select Tkachuk instead of handing it to the Avalanche, and could potentially end up giving up the top selection next June. That still is to be determined given that even last place in the league has less than an 20% chance at selecting first with the current odds of the draft lottery, but Avalanche fans can look forward to another top prospect entering the organization before long.