Free agency is now just days from opening up and there are quite a few prominent players set to hit the open market while many teams have key restricted free agents to re-sign. Here is a breakdown of Boston’s free agent situation.

Key Restricted Free Agent: F Sean Kuraly – This was Kuraly’s first season as a regular and he acquitted himself relatively well on the fourth line as he provided the Bruins with a physical presence and the odd timely goal.  Given his limited track record though, he won’t have much leverage when it comes to contract negotiations even though he is eligible for salary arbitration.  His qualifying offer came in just shy of $875K and his next deal should be close to that amount. 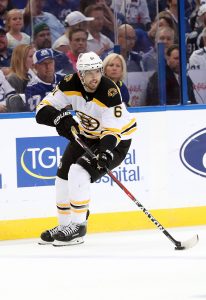 Key Unrestricted Free Agents: F Rick Nash – While his production has tapered off in recent years, that didn’t stop several teams from pursuing Nash at the trade deadline.  His days as a top-line scorer are finished but he can still slot in nicely as a second liner, something that the Bruins were hoping for when they acquired him.  Unfortunately for them, he suffered a concussion shortly after joining the team and while he was back for the playoffs, he didn’t make much of an impact.

Nash was projecting to be one of the top free agents available this summer – he’s ranked sixth in our Top 50 UFA Rankings – but he has taken himself off the market for the time being as he has told teams that he is unsure if he intends to play in 2018-19.  Boston was among the teams that had expressed interest in signing him during the interview period so it will be interesting to see if they leave enough cap space freed up this summer to circle back to Nash if he decides later on that he’s going to play next season.

F Riley Nash – The other Nash had quite the season.  After being expected to be primarily a depth player, he worked his way into a regular spot on the third line and never looked back, posting career highs in goals (15), assists (26), and points (41) while winning a respectable 48.4% of his faceoffs.  With it being a pretty weak market for centers in free agency, the 29-year-old is poised to land a considerable pay raise and some long-term contract security on the open market.

Projected Cap Space: The Bruins currently have just shy of $12MM in cap room this offseason, per CapFriendly.  Even after re-signing Kuraly and finding a replacement for Khudobin with his return appearing to be unlikely, they should have enough room to add a notable player either through trade or free agency.