The Penguins and Blues are among the teams that are interested in acquiring Hurricanes winger Jeff Skinner, Pierre LeBrun of TSN and The Athletic reports (Twitter link).  Skinner has been frequently speculated as a trade candidate in recent months as he gets set to enter the final year of his contract, one that carries a salary cap hit of $5.725MM and also a full no-move clause. 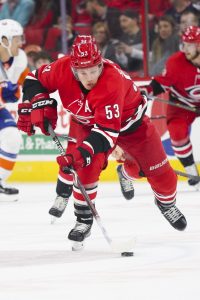 St. Louis has been looking for help in their top six dating back to last season and Skinner would certainly give them some more scoring punch as he has averaged 28 goals over the last five years.  The Blues also have a deep group of prospects up front including winger Klim Kostin and Jordan Kyrou as well as center Robert Thomas that Carolina will certainly be asking about as a possible return.

The fit in Pittsburgh is a little more curious.  There’s no doubt that Skinner would fit in nicely alongside one of Sidney Crosby or Evgeni Malkin inside their top six but they lack the cap space to add Skinner in; while they have just over $9MM in room per CapFriendly, they still have as many as six players to sign for their NHL roster.  While they could presumably deal a winger or two the other way to help offset the money, Carolina will be looking for a more significant return and the Pens also don’t have their first-round pick having dealt it for center Derick Brassard back before the trade deadline.

Meanwhile, LeBrun notes that the Kings, who have been interested in Skinner for a while, have turned their focus to UFA winger Ilya Kovalchuk.  They are one of the teams that are known to have already made a contract offer and they lack the cap space to add both him and Skinner.  Kovalchuk isn’t allowed to sign until July 1st but could make a verbal commitment before then.