The Chicago Blackhawks have acquired Anthony Duclair and Adam Clendening from the Arizona Coyotes in exchange for Richard Panik and Laurent Dauphin. Dauphin returns to the Coyotes after being part of the package sent last offseason for Niklas Hjalmarsson. No salary has been retained by either side. 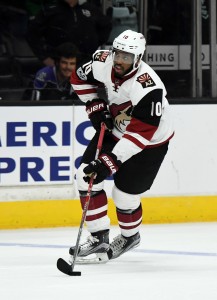 Duclair, 22, was reported to have asked for a trade during what has become another disappointing season. While he’s already matched his point total from last year, Duclair hasn’t been able to show the consistent offense that got him to a career-high 44 points in 2015-16. That 20-goal campaign was a breakout for the young winger, after a trade from New York brought him to the desert.

Last offseason, the Coyotes seemingly made several moves to try and bring immediate success to the franchise, acquiring players like Hjalmarsson, Derek Stepan, Antti Raanta and Jason Demers to help Oliver Ekman-Larsson and company make a push for the playoffs. It hasn’t worked out that way, with Arizona still languishing in last place in the NHL and perhaps now the attention will return to their original rebuild plan. Though Duclair is certainly not a past-his-prime asset, he is a pending restricted free agent who could file for arbitration, and would require a $1.2MM qualifying offer to retain his rights.

The Blackhawks on the other hand are in search of help both this year and in the near future. The club has struggled this season, but is still all-in salary wise with their core group of Jonathan Toews, Patrick Kane, Duncan Keith and Brent Seabrook. The latter of which was a healthy scratch recently, but will be back in the lineup for Chicago tonight as the dress seven defensemen in Panik’s absence.

Panik himself is part of that salary problem, after he was signed to a two-year $5.6MM contract this summer. His play has dropped off a cliff this season, recording just 16 points in 37 games and seeing his role alongside Toews disappear. Though he’s proven himself to be an NHL talent after bouncing around the league in the early part of his career, the Blackhawks can’t afford to spend close to $3MM on a player that isn’t producing as planned.

Dauphin, 22, will return to the place he made his NHL debut and try to prove once again why the team spent the 39th-overall pick on him in 2013. Obviously Coyotes’ GM John Chayka was loathe to lose him in the first place, and he gives this deal a spark of upside for the club. While he hasn’t shown a ton in his short time in the NHL, he does still have potential to be a contributing center that can provide some speed and size to the bottom-six of a lineup.

Elliotte Friedman of Sportsnet was first to report the deal was close, while Pierre LeBrun of The Athletic reported the final details.