As the end to one of the most emotional stories in recent hockey history, Bryan Bickell has signed a one-year contract with the Chicago Blackhawks in order to retire as part of the organization. Bickell released a statement regarding his retirement: 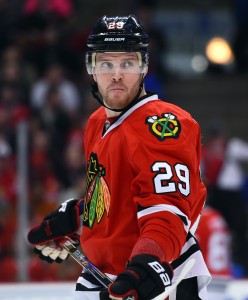 As any professional athlete will tell you, stepping away from the game is extremely difficult especially given my circumstances. I’m honored to be retiring a Chicago Blackhawk-a team that has given me and my family so many great memories.

At the start of last season, Bickell was told by doctors that he had multiple sclerosis and would likely need to end his hockey career. It was a devastating diagnosis for a player who was only 30-years old and just heading into the next chapter of his career with the Carolina Hurricanes. Bickell was not fazed though, and would work as hard as he could with the Hurricanes’ medical staff to return later in the season. He would be cleared to play just a few months later, and suit up for the Hurricanes in early March.

In his final game as an NHL player, Bickell would score in the shootout in front of his cheering family, and be congratulated by the entire roster on both sides. Everyone took a moment to forget the outcome of the game and respect the work he’d done to get back on the ice. He announced that he would retire from the game after that, and is now returning home to do so.

Bickell was drafted by the Blackhawks in the second round back in 2004, and was part of three Stanley Cup runs during his time there. Though he was never an outstanding offensive player, most fans will remember his incredible 2013 postseason, in which he scored 17 points in 23 games, second on the team only to Patrick Kane. He was a huge part of the win that year, and will end his career with 39 points in 75 career playoff games, well above his regular season rate.

He and wife Amanda now run a foundation to help neglected or abandoned dogs, rehabbing some of them into therapy dogs for others with MS or various other debilitating diseases. Check out their work at the Bryan & Amanda Bickell Foundation.