The Flames and Coyotes have agreed on a trade that sends goaltender Mike Smith to Calgary in exchange for defensive prospect Brandon Hickey, a conditional 2018 third round pick, and the negotiating rights to Chad Johnson.  The pick will become a second rounder if the Flames make the postseason in 2017-18.  Both teams have announced the deal. 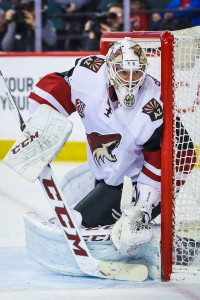 Smith has spent the last six seasons in the desert but is coming off a down season where he recorded a 2.92 GAA and a .914 SV% in 55 games.  He carries a cap hit of $5.67MM for the next two seasons and at the age of 35, he’s not a great long-term fit for an Arizona team that is clearly in a rebuilding process.  He also has a partial no-trade clause and can block a trade to eight teams.  Arizona will retain 25% of the contract in the trade.

Calgary brought in a brand new goaltending tandem last summer in Brian Elliott (trade with St. Louis) and Johnson Chad Johnson (free agency) but neither player really got the job done, posting identical .910 save percentages.  Both players are set to become unrestricted free agents in two weeks time.  The Flames’ 2018 3rd rounder had been included as a conditional pick in the Elliott trade last June (contingent on him re-signing) and the fact it has again been dealt here is pretty much a guarantee that Elliott won’t be back.

Flames GM Brad Treliving is certainly familiar with Smith as he was the assistant GM with the Coyotes when the netminder was signed to his current contract.  With two years left on Smith’s deal, the length of the contract is ideal as the team is hopeful that some of their youngsters such as Jon Gillies or David Rittich will be ready to make the NHL jump within the next year or so while the team also has youngsters Tyler Parsons and Mason McDonald in their system.

Johnson has bounced around in recent years and hasn’t spent more than one year in an organization since his time with the Rangers from 2009-10 to 2011-12.  He played in 36 games with Calgary, compiling a 2.59 GAA along with that .910 SV%.  Johnson has also spent time with the Bruins, Islanders, Sabres, and the Coyotes (four games back in 2012-13).

Hickey was a third round pick of the Flames (64th overall) back in 2014.  He recently completed his third season at Boston University, recording four goals and 11 assists in 35 games.  He was also part of Team Canada’s World Junior entry back in 2016.