Even before the free agent frenzy begins tomorrow, we have news of a potential signing. Andy Strickland of Fox Sports is reporting that a deal is all but done between the Philadelphia Flyers and Brian Elliott which will pay him an average of $2.75MM for the next two seasons. We had Elliott ranked #17 on our Top 50 Free Agent list and though we predicted a two-year deal, believed he would pull in $7.5MM over the two seasons. 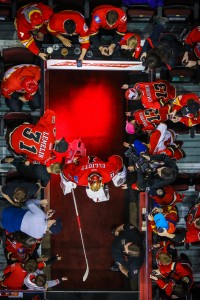 Obviously this contract can’t become official until tomorrow morning, but it’s being confirmed from multiple sources and even hinted at by Elliotte Friedman yesterday. Elliott will join Michal Neuvirth in Philadelphia where he will try to re-establish himself as a starting goaltender in the NHL. In an up and down season for the Calgary Flames, Elliott struggled mightily at times but also caught fire leading the team into the playoffs. He’d have his troubles in a first round matchup with Anaheim though, even being pulled after just as single goal in the deciding game four.

In Philadelphia, where they’ve struggled to find consistent goaltending for quite some time, Elliott is a short term placeholder. At 32, he’ll be keeping the seat warm for one of the Flyers’ young goaltending prospects like Carter Hart, Alex Lyon or even Anthony Stolarz should he fully return from injury. There’s no guarantee any of those three will turn into a legitimate starting option, but for now the team will cross their fingers and ride Elliott and Neuvirth for the next two years.

For the goalie market, this takes another name off the potential shopping list for the Winnipeg Jets (where we had Elliott projected) and others who are looking for an upgrade. While Steven Mason, Jonathan Bernier, Ryan Miller and others remain on the market, it’s not clear if a single long-term starting option remains. It will be interesting to see if that brings Washington Capitals backup Philipp Grubauer back into the market, especially given the cap troubles his team will face after signing Dmitry Orlov to a big deal. The Capitals may not have room to sign Grubauer to a new contract, and have Pheonix Copley waiting in the wings to replace him behind Braden Holtby.

With Washington unlikely to deal with division rival Philadelphia, perhaps this was the only option they had to improve in net. That improvement will be questioned though, as they let the younger and similarly skilled Steve Mason go to free agency. Perhaps he was asking to much, or just wanted out of Philadelphia but only time will tell whether they’ve really moved forward from the net out.