The New York Islanders have signed Dennis Seidenberg to a one-year contract through 2017-18. The 35-year old defenseman was to become an unrestricted free agent once again this summer. The deal will pay Seidenberg $1.25MM, a slight raise over the $1MM he earned this season. 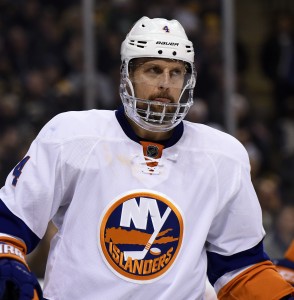 After being bought out by the Boston Bruins last summer, Seidenberg struggled to find any potential contracts until the World Cup. By showing he could still compete at the highest level playing with Team Europe, he earned a one-year deal with the Islanders and actually had somewhat of a renaissance early in the year. Scoring eight points in his first twelve games, he unfortunately broke his jaw in mid-November and would never quite get back to the same level of play. Still, he scored 22 points in 73 games for the Isles—his highest total since 2011-12—and was a team-high +25 (for what it’s worth). That kind of production for such a low cost is a good deal for anyone, as the Bruins actually paid him more to not play on their team this season.

It is interesting to note that Seidenberg will now fill the Islanders’ defense requirement for the expansion draft should they head into the June event with changes on their blueline. While currently the team must protect Johnny Boychuk due to a no-movement clause, they would only have two remaining protection slots (should they decide to go the 7-3-1 route) for some combination of Nick Leddy, Travis Hamonic, Calvin de Haan, Ryan Pulock and Thomas Hickey. That doesn’t seem like a perfect situation, and inking Seidenberg may be a signal that the Islanders are preparing for life without one or two of their current or upcoming defensemen.

A possible move of one of them is even more likely due to the cap-crunch the Islanders find themselves in, already with over $70MM committed to next season. With a new contract due for de Haan, and at least some tweaking needed in the forward group—which could come in the form of a promotion for top prospect Michael Dal Colle—the Islanders will be very tight to the cap all summer. Boychuk’s $6MM hit that doesn’t expire until the end of 2022 is the tough one, as he’ll start next season at 33.

Arthur Staple was first to break the deal on Twitter, and also provided the financial details.