According to Bob McKenzie of TSN, the New Jersey Devils have continued selling their expiring contracts, this time sending P.A. Parenteau to the Nashville Predators for a sixth-round pick. The Predators have been looking for some forward help and will pay a very small price for a player who can score 20 goals and contribute on the powerplay. 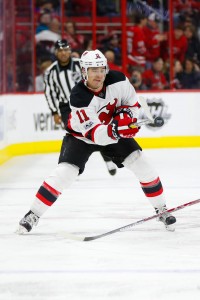 Parenteau was signed by the New York Islanders and looked like he would spend time on John Taveras’ wing again, the spot that he found a lot of success early in his career. Instead, the Islanders waived him just before the start of the season and New Jersey snapped him up. He has scored 13 goals and 27 points in 59 games and is capable of skating alongside top players if he is given the chance.

The Predators could slot him in beside captain Mike Fisher as Craig Smith has had a tough season and isn’t producing at the same level as in the past. Either way, at the same cost as Steve Ott went for last night, Parenteau is an easy gamble for Nashville to make.