As the trades all pour in after the deadline, the Dallas Stars have traded Lauri Korpikoski to the Columbus Blue Jackets in exchange for Dillon Heatherington. 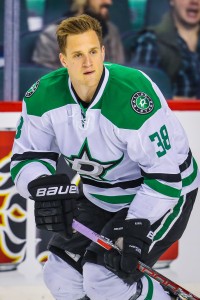 The Blue Jackets added Kyle Quincey on the back end earlier today, and now give themselves some depth up front. Korpikoski has been an effective bottom-six winger for almost a decade in the NHL, providing some consistent secondary scoring and penalty killing ability. He’ll fit in nicely for head coach John Tortorella who Korpikoski briefly played for in his rookie season.

The team has put together everything they need to go and win a playoff round for the first time in their existence. Tied with Pittsburgh in the Metropolitan division, adding some experience will help them keep pace down the stretch.

For Heatherington, this is probably a great chance to make the NHL sooner than later. Since being drafted in the second round in 2013, he has been stuck in the AHL behind a very good group of defense. In Dallas, he’ll immediately become a nice option for the team as soon as next year as they try to rebuild their defense corps. Not an offensive defenseman, Heatherington uses his long reach and physical stature to win puck battles and clear the zone effectively.

For Columbus, it’s a worthwhile move to add depth in a year that almost everything has gone right. While Korpikoski is on just a one-year deal, he may be an option to re-sign in the summer and grow with this group.