The Calgary Flames have put pen to paper with one of their top prospects, inking Dillon Dube to a three-year, entry-level contract. The financials of the deal have not been released, and with Dube’s Kelowna Rockets still in the WHL playoffs, it’s unclear if he’ll head to the AHL on an ATO at all this year. 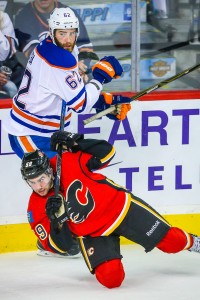 Selected 56th overall in last summer’s draft, Dube put in another good season for Kelowna this year, scoring 55 points in 40 games. He was limited at the beginning of the season with a lower-body injury, but healed enough to play for Canada in the World Juniors where he scored three points in seven games and helped Canada to a silver medal.

Incredibly dangerous off the rush, Dube uses his elite quickness and edge work to fly around defenders through the neutral zone but sometimes has trouble engaging physically on the forecheck. Though he looks small at times on the ice, he actually is quite solid (5’11” 192-lbs) and has shown bursts of ability to use his strength to defend the puck and create havoc below the hash marks. He needs to do that more often, or he’ll never be able to create offense on a consistent basis in the professional ranks.

Since he doesn’t turn 19 until this summer, he will undoubtedly go back to Kelowna for his final year of junior, where he should be expected to improve on his numbers. If he’s healthy, he’ll hopefully push towards 80+ points and be a big part of the World Junior team in a more advanced role. Flames fans should be excited, as at worst he projects as an energy forward capable of moving up and down a lineup.