The Pittsburgh Penguins have acquired Ron Hainsey from the Carolina Hurricanes in exchange for Danny Kristo and a second-round pick. The Penguins have fired the first Eastern Conference salvo as they acquire the veteran defenseman. With the injury to Olli Maatta, it seemed just a matter of time until Pittsburgh addressed their defense and Hainsey seems like a perfect fit. The team announced just after the deal broke that Trevor Daley underwent knee surgery and will also miss six weeks, another blow to the blueline. Carolina will be retaining 50% of Hainsey’s $2.83MM cap hit for the remainder of the year. 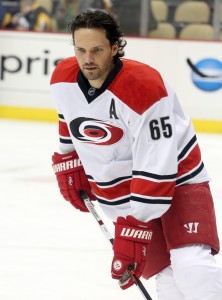 A veteran of 891 NHL games, Hainsey’s streak of never reaching the postseason is certain to come to an end now. Capable of logging big minutes for any club, he’ll likely be asked to do a little less in Pittsburgh than in Carolina where he was playing over 22 minutes a night. His ability on the penalty kill is likely what interested GM Jim Rutherford most—who actually signed Hainsey to his current deal while with Carolina in 2014—as the Penguins currently have the 22nd ranked PK in the league.

Hainsey has an incredible record of durability, something that will be tested as he heads to the playoffs for the first time. The 35-year old (36 in March) has played in at least 80 games each of the past three seasons and seven times in his career. With Maatta, Daley and Justin Schultz all either out long-term or battling injury, the fact that he can be penciled in every night is important to the Penguins.

Despite that durability though, the Penguins paid a steep price for this addition. Hainsey is a capable defender and excellent penalty killer but doesn’t come with much offensive upside at this stage in his career. It’s the salary retention that likely bumped the pick up to a second-rounder, as it leaves room for the team to make another addition if necessary.

Kristo is a former second-round pick in his own right, though has never broken into the NHL. A consistent scoring threat in the minor leagues, he is now 26 and is barely a prospect. Though he does come with some value as organizational depth on the wing, he shouldn’t be seen as much going forward.

Carolina now holds ten picks in this summer’s entry draft, including six in the top three rounds. They also could still sell more at the deadline, shedding pending free agents like Viktor Stalberg and Jay McClement or trade deadline favorite Lee Stempniak if they choose. With a young core and more coming, they are a team on the rise in the Eastern Conference, despite struggling this season.

Renaud Lavoie of TVA Sports was first to report the trade on Twitter, with Pierre LeBrun of ESPN providing details on the retained salary.