Jan 27: Caufield will undergo surgery on February 1 in Colorado, according to Eric Engels of Sportsnet.

Jan 21: The Canadiens have struggled offensively this season and scoring goals just got a lot harder as the team announced that winger Cole Caufield suffered a season-ending shoulder injury and will undergo surgery in the near future.  There is no timeline for how long the recovery period will take with an update being expected after the medical procedures are completed. 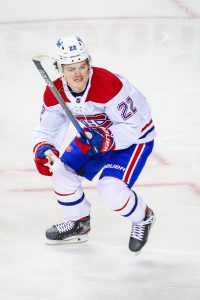 Caufield played in Thursday’s loss to Florida and was a full participant in practice on Friday so the announcement comes as somewhat of a surprise.  TVA Sports’ Renaud Lavoie notes (Twitter link) that the injury isn’t something that just happened but has instead been lingering for the past several weeks.  The 22-year-old is tied for 11th in the league in goals this season with 26 while TSN noted earlier this week that he’s tied for eighth in the league in goals since Martin St. Louis took over behind the bench a little less than a year ago.  Caufield has over 21% of Montreal’s goals this season with the team ranking 28th in the league in goals scored heading into Saturday’s action.

Caufield is set to become a restricted free agent this summer without salary arbitration eligibility.  His case is one of some intrigue given how productive he has become under St. Louis while GM Kent Hughes indicated earlier this week that preliminary discussions are underway with a desire to lock him up on a long-term contract.  However, with his first season being a short one having burned his first entry-level year after his college campaign, Caufield only has 123 career regular season contests under his belt which is considerably less than what most players that sign a long-term, big-money agreement after their first contract have.

In a corresponding roster move, the Canadiens announced (Twitter link) that forward Alex Belzile has been recalled from AHL Laval.  The 31-year-old has 13 career games of NHL experience with Montreal over the last two seasons and has 13 goals and 12 assists in 29 games with the Rocket this season.  Even with this recall, Montreal only has 11 healthy forwards on their active roster and they are expected to dress seven defensemen tonight against Toronto.