12:46 pm: The Capitals have officially signed Kuemper to a five-year deal worth $5.25MM per season.

6:57 am: While the goalie shuffle on the first day of free agency won’t be as big as it has been in recent years, a couple of notable goalies will be on the move.  One of those is Darcy Kuemper who appears to have his next team in place as ESPN’s Emily Kaplan and TSN’s Bob McKenzie report (Twitter links) that the netminder will become the new starter for the Capitals once free agency officially opens up in a few hours.  Daily Faceoff’s Frank Seravalli adds (via Twitter) that the deal could be in the range of five years at $5.5MM per season. 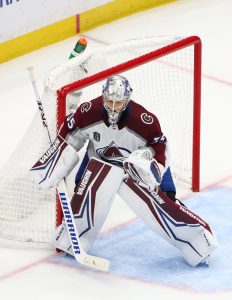 The 32-year-old is coming off a successful season with Colorado that saw him post a 2.54 GAA and a .921 SV% in 57 starts while battling through injuries during the playoffs to help lead the Avs to the Stanley Cup, helping make him the top-ranked goalie on our Top 50 Free Agents list.  It worked out quite well for him that former Colorado goalie Philipp Grubauer decided to go last summer, prompting the Avalanche to flip Conor Timmins and a first-round pick to Arizona to get what turns out to be just one year of the netminder although having won the Cup, they certainly won’t mind.

Kuemper’s numbers are a considerable improvement on what Washington received from their netminders last season as the four goalies they used combined for a 2.81 GAA and a .901 SV%.  Considering that the Caps were still decent in the goals allowed department (allowing the 12th-fewest in the NHL) in 2021-22, Kuemper’s addition should certainly make them a stingier team.

Washington will still be on the lookout for another goaltender as both of their regulars from last season are gone – Vitek Vanecek to New Jersey in a draft-day trade while Ilya Samsonov was non-tendered on Monday.  Even veteran depth goalie Pheonix Copley is set to hit the open market later today.  They enter the day with nearly $9MM in cap room per CapFriendly before factoring in LTIR possibilities and a good chunk of that money will be heading towards this new tandem.