After becoming a regular with the team this season, Timothy Liljegren has earned a raise. The Toronto Maple Leafs have signed the young defenseman to a two-year contract extension that will come with an average annual value of $1.4MM. Liljegren was scheduled to become a restricted free agent this summer. 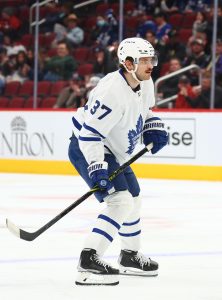 Selected 17th overall in 2017, it has been a bit of a bumpy ride for the young defenseman to this point. He came over to North America immediately following his draft and was one of the youngest players in the AHL, but when he struggled to make the leap to the next level, some wondered whether he ever would be a real contributor for the Maple Leafs.

That jump came about this season, when the 23-year-old played in 61 games, recording 23 points and putting up outstanding possession statistics. Though some of that is due to being deployed against weaker competition, there were times when Liljegren was arguably Toronto’s most effective defenseman, especially when paired late in the year with Mark Giordano.

Still, when the playoffs came around his inexperience showed, and head coach Sheldon Keefe decided to remove him from the lineup in favor of Justin Holl and Ilya Lyubushkin partway through the series. With this new deal in hand, Holl on the last year of his contract, and Lyubushkin an unrestricted free agent, there is a clear path forward for Liljegren as a top-four option in Toronto.

Whether he can handle that increased responsibility remains to be seen but for a team that has struggled to produce many homegrown defensemen, his development was one of the biggest positives of this year. If that upward trajectory continues, the $1.4MM cap hit could look like a steal as soon as next season, and help the Maple Leafs fit in even more talent around the edges of the roster. The fact that it leaves him as a restricted free agent is important, though he will be eligible for arbitration at its expiry.

It will be interesting to see if this deal is a template for fellow RFA Rasmus Sandin, who has shown similar upside in his short time in the NHL and also needs a new contract this summer.