After barely missing out on their third consecutive Stanley Cup championship, the Tampa Bay Lightning may be forced to do some drastic reshuffling of the core. Elliotte Friedman of Sportsnet reports that the team is working with Ryan McDonagh to find out if there is a fit somewhere else in the league. McDonagh has a full no-trade clause and can essentially decide where he plays at this point. 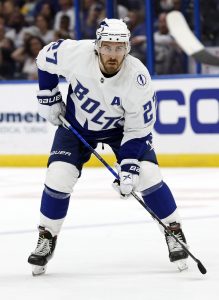 Friedman notes that the team wants to retain both Nick Paul and Ondrej Palat (among others) who are set to become unrestricted free agents. Moving McDonagh would essentially be a cap move, given the $6.75MM hit he carries through 2025-26.

It’s shocking news, given how good McDonagh has been for Tampa Bay since arriving in 2018. Acquired from the New York Rangers along with J.T. Miller for a package that revolved around Brett Howden, Libor Hajek, and draft picks, it was a move that was critical in building the squad that won two years later. McDonagh has averaged nearly 22 minutes a night with the Lightning, eating up the toughest defensive assignments to allow Victor Hedman, Mikhail Sergachev, and others to contribute more at the offensive end of the rink.

Now 33, with nearly 1,000 tough, physical games under his belt, it might be prudent for the Lightning to get out from under McDonagh’s contract before it becomes an issue. He is signed longer than any other defenseman on the roster and yet is several years older than most. Despite his continued strong play, and the fact that he is “hugely popular” in the locker room according to Friedman, the Lightning need to make a change somewhere if they’re going to keep Palat and Paul.

The team already projects to be over the cap for next season, though Brent Seabrook’s contract will provide a little bit of long-term injured reserve wiggle room. Jan Rutta, a depth defenseman that has been useful over the last few years, and Riley Nash, who stepped into the lineup in Brayden Point’s absence this postseason, are also both scheduled to become UFAs.

There have been other players jettisoned from the Lightning over the years. Miller, Tyler Johnson, and Yanni Gourde left with money still on their contracts. Blake Coleman and Barclay Goodrow couldn’t be re-signed because of higher bidders on the market. Still, none of those moves seem as important as a McDonagh move would be, given how integral he has been to the defense over the last several years. His absence would leave a gaping hole on the second pairing, one that the team doesn’t appear to have an internal candidate for.

Perhaps a player like Cal Foote could step into an increased role, but a McDonagh move could leave the Lightning looking outside the organization for an answer. A cheaper answer, it would be, and likely one that isn’t quite as effective as the veteran–at least for the time being.