June 21: The team has now officially announced DeBoer as the next head coach of the Stars. While the team did not release financial information or term, LeBrun reports that it is a four-year deal worth $4.25MM per season.

Pete brings a wealth of experience to our dressing room, and we’re thrilled to name him our next head coach. Every team that he has taken over has not only shown immediate improvement but has been ultra-competitive in the Stanley Cup Playoffs. He has taken five teams to the Conference Finals, and two of those to the Stanley Cup Final, in his 14 years as a head coach. His resume displays the high standards he sets and his ability to get his team to play up to that level consistently. We’re excited to welcome Pete and his family to Dallas.

June 19: A pair of coaching vacancies have been filled in recent days with Vegas and Philadelphia finding their new bench bosses.  It appears Dallas is on the verge of doing the same as Sportsnet’s Elliotte Friedman reports (Twitter link) that the Stars are expected to name Peter DeBoer as their new head coach.  ESPN’s Greg Wyshynski adds (Twitter link) that an official announcement is not expected to come tonight with Pierre LeBrun of TSN and The Athletic notes (Twitter link) contract terms are still being discussed. 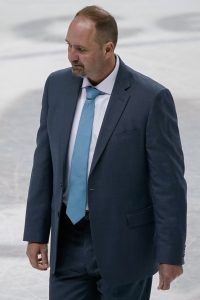 DeBoer was a fairly late entrant into the coaching market this spring as Vegas waited a couple of weeks before making the decision to part ways with him.  He had a pretty successful run with the Golden Knights he led the team to a 98-50-12 record in 160 regular season games, good for a .650 points percentage.  Vegas also had two good playoff runs with him at the helm as they went 22-17 over that stretch.  However, it was the fact that they didn’t make it to the postseason that resulted in his departure with Bruce Cassidy taking over that job on Tuesday.

Meanwhile, the Stars have been on the lookout for their next bench boss for the past month after the team and Rick Bowness mutually agreed to part ways with their assistant coaches also departing.  Dallas finished in the top Wild Card spot in 2021-22 (four points ahead of Vegas) and gave Calgary a pretty good run in the first round before ultimately falling in seven games which led to them changing things up.

The fact that the Stars are looking for a win-now coach doesn’t come as much of a surprise as they largely have a veteran core in place with a team that’s built more for the present than the future.  Under Bowness, Dallas has consistently been one of the stronger defensive teams in the league but they have also found themselves in the bottom half of the league offensively with Tyler Seguin and Jamie Benn both taking considerable steps back in recent years.  Considering both are on the books at a high price tag ($9.5MM for Benn, $9.85MM for Seguin), finding a coach that can coax more out of them offensively would certainly help their chances moving forward.

Dallas GM Jim Nill feels DeBoer is the coach that can bring out more offensive production without drastically compromising their defensive principles.  There is some recent cause for optimism on that front based on his time with the Golden Knights as Vegas was in the top half of the NHL in both goals scored and allowed in each of his three seasons with them.

DeBoer sits 27th all-time in games coached at 1,015 and is 26th in wins with 513 and assuming this contract becomes official, he’ll have a chance to improve those numbers on a Stars team that should once again be in the playoff mix in 2022-23.  He’ll become the fifth different head coach for Dallas since 2013 when Jim Nill took over with the others being Lindy Ruff, Ken Hitchcock, Jim Montgomery, and Bowness.