June 29: TSN’s Pierre LeBrun is reporting that the Blackhawks signed Richardson to a four-year contract. He’ll be the team’s head coach through 2025-26.

June 27: The Blackhawks have made it official, hiring Richardson as their next head coach. General manager Kyle Davidson released a statement:

We are excited having a seasoned coach like Luke join the organization as head coach. Luke shares our vision and goals for the future, and he will have an opportunity to build an environment and culture of high performance, hard work, and high accountability. Throughout the interview process, it became evident that he not only had every quality we were looking for in a head coach, but also is a high-character individual that was perfect to lead this next era of the Chicago Blackhawks.

June 24: The Winnipeg Jets may be waiting on Barry Trotz to make a decision but the Chicago Blackhawks are nearing one of their own. Frank Seravalli of Daily Faceoff tweets that Luke Richardson is expected to be the next head coach of the Blackhawks, and the two sides are putting the finishing touches on a contract.  Scott Powers of The Athletic reported earlier today that Richardson, interim head coach Derek King, and Vancouver Canucks assistant Brad Shaw were the three finalists. 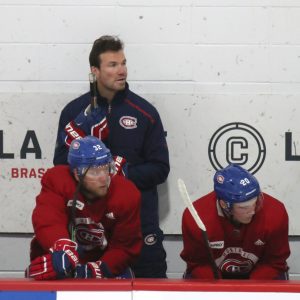 Richardson, who has spent the last four seasons as an assistant with the Montreal Canadiens, has long been looked at as a future NHL bench boss, even going back to his playing days. The 53-year-old former defenseman played more than 1,400 games in the league, and almost immediately transitioned onto an NHL coaching staff with the Ottawa Senators in 2009.

With the Blackhawks not expected to contend next season as they head into a complete rebuild, getting an inexperienced (and therefore inexpensive) bench boss always seemed to be the likely move. Richardson has just a handful of games as an NHL head coach–all coming in the 2021 playoffs when Dominique Ducharme was held out with COVID-19.

He does, however, have four years of experience as a head coach in the AHL, and is as well-respected an assistant as you will find around the league. His departure from the Canadiens will leave a substantial hole to fill, as Montreal tries to climb out of the bottom of the league under new head coach Martin St. Louis.

It is not clear what this would mean for King, who was brought up from the minor leagues to replace Jeremy Colliton early in the season. The Blackhawks went 27-33-10 under the interim boss, in his first taste of NHL head coaching. Powers wrote today that it would surprise him if the Rockford IceHogs didn’t stay with Anders Sorensen as head coach, meaning King could be looking for another role somewhere else.