In the spirit of the holiday season, PHR has been taking a look at what teams are thankful for as the season approaches the midway mark. There also might be a few things your team would like down the road. We’ll examine what’s gone well in the early going and what could improve as the season rolls on for the Winnipeg Jets as we wrap up our series.

What are the Jets thankful for?

Their deep top end of their forward group.  Pierre-Luc Dubois has been much better in his first full season with Winnipeg, giving the Jets a strong one-two punch with him and Mark Scheifele.  Kyle Connor is having a standout season, averaging a point per game while playing in all situations.  Nikolaj Ehlers and Blake Wheeler are still top-six options while Andrew Copp is on pace for a career year (while logging over 20 minutes a game).  Paul Stastny is a versatile player that can play both down the middle and on the wing and is still capable of playing in the top six when called upon.  That’s seven quality top-six forwards at their disposal, a luxury that not a lot of teams have.

Who are the Jets thankful for? 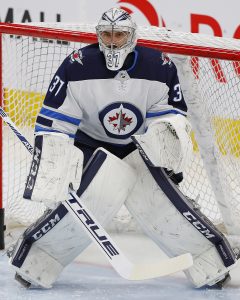 For the last three seasons, he has led the league in shots faced and as Winnipeg makes up their games in hand over the coming months after having several postponed games, there’s a good chance that he makes it four in a row.  At a time where many teams are looking more favorably at the idea of a platoon or tandem situation, Hellebuyck has been the old-school starter, logging heavy minutes.  His numbers are down a little bit this season but still above average but he’s only two years removed from winning the Vezina Trophy while he finished fourth in voting last year.  He still has two years left on his contract at a very reasonable price $6.167MM for someone that logs the minutes he does.

Getting more from their defense.  Kevin Cheveldayoff spent a lot of resources over the offseason to rebuild their back end after it was exposed as a weakness last season with the additions of Nate Schmidt and Brendan Dillon.  They were supposed to complement a pair of strong offensive defenders in Neal Pionk and Josh Morrissey to give them a well-rounded group.  However, Winnipeg hasn’t received a lot of production from their back end with just ten goals in total, half of which came from Morrissey.  As a result, the effects from that upgrade really haven’t been felt – they’ve been better defensively but that has been mitigated with a drop in output.  Getting the production back would give them the best of both worlds and really give them a boost heading into what will be a busy second half of the season.

There’s a big difference here between what they will want and what they can actually do.  Once Wheeler is able to come off LTIR (which will be in the next few days), their cap space will be gone and they’ll have to soon drop to close to a minimum-sized roster to get back to compliance.  So while they’d undoubtedly love to try to add (either up front or defensive depth), they’re going to be very limited in what they can afford as they’ll have to match money or add someone making close to the minimum and send someone down to make room.  That means they’ll be forced to shop more for depth pieces.  Adding some veteran depth up front would be beneficial and while finding a cheap goalie will be a tough, an insurance policy behind Eric Comrie is something Cheveldayoff should want to do.