As the holiday season approaches, PHR will take a look at what teams are thankful for as the season heads towards the one-quarter mark. There also might be a few things your team would like down the road. We’ll examine what’s gone well in the early going and what could improve as the season rolls on for the Colorado Avalanche.

What are the Avalanche thankful for?

The impact of a single trade is rarely as extreme as that 2017 deal. The Avalanche, coming off one of the most dreadful seasons in NHL history, ended up sending Duchene to the Ottawa Senators in a three-team deal that netted them Samuel Girard, Vladislav Kamenev, Shane Bowers, Andrew Hammond, and three draft picks. The best of those, Ottawa’s first-round pick in 2019, became Bowen Byram, meaning with Girard, Duchene had landed the team–at a minimum–two top-four defensemen.

But it doesn’t end there. In the 2018 draft, when the Avalanche had Nashville’s second-round pick, they decided to trade down when No. 58 was on the board. The team traded that pick to the Pittsburgh Penguins, who used it on Filip Hallander, for a third and a fifth. The third became Justus Annunen, who has quickly developed into the team’s “Goaltender of the Future.” Annunen is making his NHL debut tonight, coming on in relief of Jonas Johansson, and could find himself battling for regular appearances in the coming years. 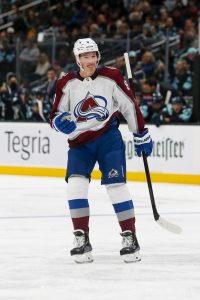 Who are the Avalanche thankful for?

Quite simply, Makar is one of the best defensemen in the league at age-23. The fourth-overall pick from 2017 is scoring at a better than point-per-game rate once again and is in the race for the Norris Trophy in year three. He finished ninth in that race as a rookie, was the runner-up as a sophomore; it appears as though it’s just a matter of time before he takes home the award.

Notably, it’s Makar’s ability to play so much and so well that allows the rest of the defensive group to slot into more appropriate roles. Veteran Erik Johnson might be miscast as a top-four option if he were on another team given his history in the league and pricey contract, but some nights he’s able to play just 15 minutes because Makar is soaking up so much ice time. As the Avalanche move forward, that will make it possible for the team to fit everyone in under the cap–Makar’s $9MM hit through 2026-27 was a bargain from day one.

This piece is dropping at perhaps an inopportune time, as Avalanche fans may not be thankful for much after tonight’s game against the Ottawa Senators. After Kuemper was injured a few days ago, Johansson has shown that he simply can’t carry the load as an NHL starter. He won’t have to for long, as Pavel Francouz is on the verge of finally returning, but Kuemper’s injury has highlighted an issue for the Avalanche.

After being unable to retain Philipp Grubauer in the offseason, the team was forced to make a move for Kuemper–and his long injury history. The 31-year-old netminder has only started 30 games or more once in his entire career, and is on the shelf once again. He hasn’t even been very effective this season when he’s been in the net, but his availability is the most important thing to consider.

That’s why another NHL-level netminder is an absolute must for the Avalanche before the trade deadline. Even if Francouz comes back healthy, the team can’t go into the playoffs with this kind of uncertainty again. In the 2020 bubble, with a team that looked poised to compete for a Stanley Cup, Michael Hutchinson was forced into the net after two injuries. The team has to have a better option this time around.

That’s certainly going to be a difficult task, given the team already has barely enough cap space to even activate Francouz when he’s ready to come off long-term injured reserve. After handing out big deals to Makar and captain Gabriel Landeskog, things are tight in Joe Sakic’s front office. The team has always been creative, but will have to find a way to add an NHL goaltender without selling off too much of the current group.