As the holiday season approaches, PHR will take a look at what teams are thankful for as the season heads towards the one-quarter mark. There also might be a few things your team would like down the road. We’ll examine what’s gone well in the early going and what could improve as the season rolls on for the Calgary Flames.

Injuries are a part of sports, and they’re going to happen for every team in the NHL at some point. But so far, the Flames have escaped relatively unscathed. Fifteen different players have suited up in at least 19 of the team’s 20 games, including basically every important member of the group.

In fact, since they started the year, Calgary has completed just two recalls from the minor leagues. Jacob Markstrom and Daniel Vladar have been the two dressed goaltenders in all 20 matches, meaning not only have they had a consistent effort, but also a consistent group in the locker room. 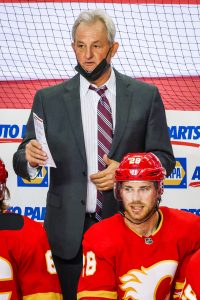 It’s hard to believe that a coach can make such a huge difference, but the Stanley Cup-winning bench boss appears to have secured a complete buy-in from his squad and a commitment to playing his low-event checking style. The Flames have allowed just 38 goals through 20 games and have the best goal differential in the league.

Not everything is because of Sutter, as there have been some very strong performances–perhaps even unexpected–from the defensive unit, but the veteran coach has the entire group moving in the right direction.

The one concern some have when discussing the Flames, a team that has dominated the league so far, is the disappearance of Monahan’s offense. Through the first seven seasons of Monahan’s career, he had 194 goals, good for more than 29 per 82 games. Since the start of the 2020-21 season, he has 12 (just seven since Sutter took over).

His minutes have dropped to the lowest of his career and he has generated just 25 shots on goal through 20 games this season. For a player carrying a cap hit of $6.375MM, that’s simply not acceptable even if the overall Flames group is still churning through opponents. The idea of Monahan returning to some semblance of the 30-goal scorer he once was, without disrupting the defensive structure the Flames currently have would make them all the more imposing.

Johnny Gaudreau has been outstanding this season, leading the team in scoring with 23 points in 20 games. He’s also an unrestricted free agent at the end of the year, so his future should be front and center when discussing any contract negotiations in Calgary. But it’s Tkachuk, who has been a lynchpin of Sutter’s structure and once again seems like the obvious choice as the team’s future captain that will really decide how much they could spend on Gaudreau.

Already the team’s highest-paid player, Tkachuk is about to hit restricted free agency for the last time, a year away from the open market. He won’t even turn 24 until next month, but is already in the midst of his sixth season in the league, meaning any extension would buy out almost exclusively UFA seasons. It will be a massive contract if Tkachuk does agree to something long-term with the Flames, a number that would limit them elsewhere or cause other cost-cutting measures (perhaps like a bottom-six center that makes more than $6MM next season).

There’s nothing that would be more important for the Flames this winter, so they can also go into the trade deadline with some sort of cap certainty moving forward.