As the holiday season approaches, PHR will take a look at what teams are thankful for as the season heads towards the one-quarter mark. There also might be a few things your team would like down the road. We’ll examine what’s gone well in the early going and what could improve as the season rolls on for the Buffalo Sabres.

A conclusion to the Jack Eichel saga.

For months, there was constant discussion about how Buffalo management was mistreating their frustrated, injured former captain, with a new story coming out nearly every day. Since completing the trade that sent Eichel to the Vegas Golden Knights, all of that chatter has been silenced and Kevyn Adams is no longer the target of the fans’ ire (at least not for that).

That doesn’t mean the Sabres are better without Eichel, and it certainly doesn’t mean Adams has figured out how to make his team competitive, but at least the magnifying glass has been moved somewhere else for a little while.

The Sabres are 7-10-2 on the season. They’re 2-7-1 in their last ten. They’ve lost four in a row. But still, it feels as though they finally have a coaching staff that the fans can believe in, at least in the short term. Granato has made the team competitive, even if they will ultimately finish near the bottom of the league again in another rebuilding season.

The powerplay is in the top half of the league, Rasmus Dahlin (even with his warts) appears rejuvenated, and young players like Tage Thompson and Rasmus Asplund are finding their way. There are such huge gaps in the roster construction that Granato was never going to be able to make this team a contender, but it at least resembles an NHL team for the first time in a while. 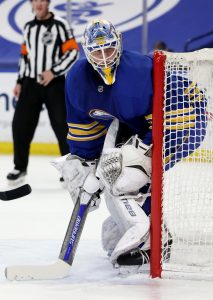 There is defensive help on the way. There are offensive players honing their game in the minor leagues. But the Sabres aren’t going to go anywhere without a legitimate NHL starter, and right now it’s not clear if there is one in the organization.

Forty-year-old Craig Anderson has been good when healthy, and Dustin Tokarski has been a nice story after his journeyman career. But the net was supposed to be handed over to Ukko-Pekka Luukkonen before long and the young netminder hasn’t progressed as hoped. In 11 AHL games he has an .883 save percentage and certainly doesn’t seem ready to take the Buffalo crease. That doesn’t mean he won’t develop into an NHL starter at some point down the road, but bad goaltending can be the bane of consistent effort. It’s difficult to play hard every night just to watch goals go in behind you, and a strong netminder can help make young defensemen feel more confident.

The Sabres have always had trouble surrounding their top players with effective depth, and even though this year they have secured three picks in the first round, they don’t have any extra selections in the other six. If they’re going to do this rebuild quickly and effectively, they need to hit on a few second, third and fourth-round picks as well.

Selling off a few expiring contracts at the deadline should be the plan, especially on defense, where they’ll have to clear room for Owen Power anyway when Michigan’s season comes to an end (assuming they’re able to sign him this year).