Jared Bednar will be sticking around behind the bench of the Avalanche for a little while longer as the team announced that they have signed their head coach to a two-year contract extension.  The deal will run through the 2023-24 season.  GM Joe Sakic released the following statement on the signing:

Jared has established himself as one of the top coaches in the NHL. He is a great leader who has the complete trust of our players and staff. Under his guidance our team has continued to make great strides and improve every year. We know he is the right person to help us take that next step and compete for a Stanley Cup.

Bednar is in his sixth season as Colorado’s bench boss after taking over in a somewhat unique fashion when he was hired late in the summer of 2015 following Patrick Roy’s abrupt resignation.  His first year was a particularly rough one but since then, the Avs have been a consistently strong team, posting a points percentage of at least .549 and have made four straight postseason appearances with the last three resulting in second-round exits, helping lead him to the second-most coaching victories in Avalanche history (third in franchise history dating back to their time in Quebec). 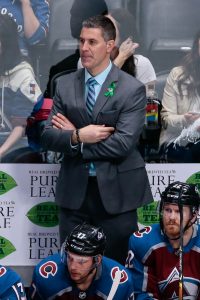 Under Bednar’s tutelage, Nathan MacKinnon and Mikko Rantanen have become legitimate top-line stars and the two have anchored a top line alongside captain Gabriel Landeskog for long stretches during his tenure.  They’ve also become one of the stronger defense corps in the league, anchored by young star Cale Makar along with younger veterans Devon Toews and Samuel Girard.

However, it hasn’t been a great start to the season for the Avalanche this season.  They currently sit fifth in the Central Division with a 7-5-1 record although they’ve played the fewest games in the Western Conference so there is room for some improvement on their seeding as they make up their games in hand.

Some had wondered if the slow start coupled with their inability to get over the hump in the postseason would be enough for Sakic to consider a coaching change but clearly, that didn’t happen.  That said, a two-year extension isn’t a significant vote of confidence either.  But it’s enough to get rid of the storyline of being in a lame-duck situation and it should take the heat off for the time being as they look to move up the standings while Bednar takes aim at that Colorado wins record as he’s just two behind Bob Hartley for first.