After a long, successful career, Braydon Coburn is hanging up his skates. The veteran defenseman announced his retirement today, issuing a statement through the NHLPA: 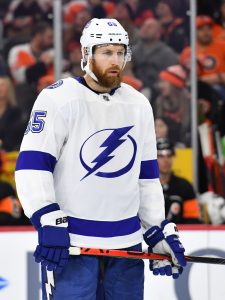 Walking into NHL buildings for the last 16 years, surrounded by hockey’s greatest players, coaches, management, trainers, officials, and fans, has been an incredible privilege. I’m very proud to have come into the league as an Atlanta Thrasher, proudly wore the orange and black as a member of the Philadelphia Flyers, won a Stanley Cup with the Tampa Bay Lightning and finished my career with the Ottawa Senators and the New York Islanders.

Thank you to my parents, grandparents, and siblings for the sacrifices you made helping me realize my NHL dream. Thank you to my minor hockey coaches for always making the game fun, and countless others that taught me how awesome it was to be a part of a team. I would also like to send a sincere thank you to my teammates, friends and family, especially my wife, Nadine, my daughter, Rory, and my son, Blair, for their patience, support and unwavering love. I’m thankful for the amazing people I have met along the way, and I am very excited for what is to come.

Coburn, 36, split last season between the Senators and Islanders, playing in 19 games total. Before that, he had spent several years with Tampa Bay, where he won a Stanley Cup in 2020. Though he was just a depth player by then, that certainly wasn’t the case for most of his career. For nine years in Philadelphia, Coburn averaged nearly 22 minutes a night, logging time in basically every situation. A huge, physical specimen standing at 6’5″, he was also talented enough with the puck to run a powerplay early in his career.

Over 983 regular season games, Coburn racked up 234 points, 720 penalty minutes, and more than 1,400 hits. He participated in the World Championship for Tema Canada on two occasions and was part of the 2005 World Junior squad that is considered one of the greatest groups of all time.