The 2022 Winter Olympics are coming fast, with just a few months before NHL stars jet off to Beijing, China to compete for their respective countries. Hockey Canada announced recently that Sidney Crosby, Connor McDavid, and Alex Pietrangelo were the first three players selected to their team, and now Sweden has announced their counterparts. Mika Zibanejad, Gabriel Landeskog, and Victor Hedman have been named to Team Sweden for the 2022 Games. 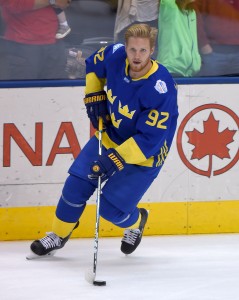 Zibanejad may not have reached the incredible heights of 2019-20 last season, but he’s still a force for the Rangers and projects to be Sweden’s first-line center at the upcoming tournament. He scored 41 goals in just 57 games during the COVID-shortened season two years ago and came back with a strong enough 50 points in 56 games this past season. In fact, center is actually a position of great strength for the Swedes this time around, with Elias Pettersson, Nicklas Backstrom, Mikael Backlund, and William Karlsson all strong candidates to take a spot down the middle.

They won’t be too bad on the wing either, starting with Landeskog who was already an alternate captain for the nation at the 2014 Olympics when he was just 21. A born leader, he has represented Sweden at every major event, including the U18 WJC, U20 WJC, World Championship and World Cup. He took home a silver as part of that 2014 group and has become a reliable point-per-game player at the NHL level, complementing world-class talent and bringing versatility to any lineup.

Few NHL fans would be surprised if Hedman was given the captaincy of Sweden, but it would actually be an interesting decision given his history with the national program. He was left off the 2014 team despite the obvious skill he showed in the early part of his career, with players like Johnny Oduya, Jonathan Ericsson and even 35-year-old Henrik Tallinder going to Sochi over him. Because of the regular playoff success of the Tampa Bay Lightning, Hedman also has gone to the World Championship just once since 2013 and three times total, going on long playoff runs most seasons instead. It’ll be his first chance to represent his country at the Olympics, and he was an obvious choice this time around.

Each participating country was required to declare three players, while the full “long-list” of 55 potential names will be submitted by October 15.