There won’t be an arbitration hearing this year after all.  Flyers defenseman Travis Sanheim was the last arbitration-bound player without a contract but that has changed as Sportsnet’s Elliotte Friedman reports (Twitter link) that the blueliner has agreed to a two-year deal with a $4.675MM AAV. PuckPedia reports that the structure of the deal is as follows:

The 25-year-old inked a two-year bridge contract two summers ago coming off a career-best 35-point season and at the time, it was expected that he’d continue his ascent and ideally become a top-pairing-caliber blueliner for Philadelphia.  That didn’t exactly happen, however.  In particular, Sanheim struggled last season, notching just 15 points in 55 games despite logging 21:53 per game (also a career-high) with some struggles in his own end.  There is no doubt that Sanheim is still a big part of their future but the exact role isn’t as certain as it appeared to be. 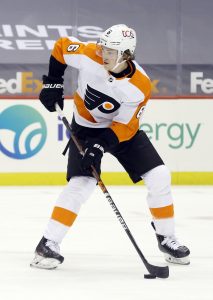 That’s where this deal comes in.  The two-year term basically amounts to a second bridge deal, allowing both the Flyers and Sanheim more time to assess his long-term value and role.  Notably, it also walks him to unrestricted free agency in 2023.  That’s hardly an ideal scenario for Philadelphia but when they elected to take him to arbitration earlier this month, it created the situation for this to happen as Sanheim simply could have elected the two-year term and taken his chances with the arbitrator.  They get to avoid the hearing with this contract but he’ll still be able to hit the open market in his first eligible year.

Sanheim should remain behind Ivan Provorov on the left side of a new-look Philadelphia back end that now features Ryan Ellis who was brought in from Nashville plus veteran Keith Yandle to replace the offense that Shayne Gostisbehere provided as he was moved in a cap-clearing move to Arizona.

There won’t be any more shakeups coming for the Flyers, however, at least not without matching money.  This move basically eats up all of their remaining cap space and will likely see them carrying less than the maximum of 23 skaters to start the season.  But with the changes on the back end and the addition of Cam Atkinson up front, GM Chuck Fletcher got the core shakeup he wanted and with Sanheim signing, has his full roster under contract.  Will it be enough to get back to the playoffs in what projects to be a tight Metropolitan Division?  We’ll find out soon enough once the season gets underway.