As it turns out, Pekka Rinne won’t be playing for another franchise after all. The legendary Nashville Predators goaltender has decided to hang up his pads, announcing retirement after 15 years. Rinne explained his decision in a long letter to the fans of Nashville, thanking some of the players that have meant the most to him over the years. 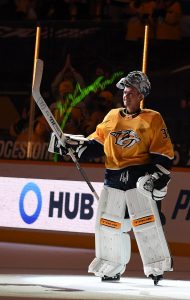 Rinne, 38, stands alone at the top of the mountain for the Predators, holding basically every franchise record that a goaltender can. He is the team leader in games (683), starts (667), wins (369), shutouts (60), goals-against average (2.43) and saves (17,627). He also leads all Finnish goaltenders in games, starts, wins and shutouts. Those 369 wins tie him for 19th all-time with Tom Barrasso, though he’ll likely be passed by Carey Price next season. He won the Vezina Trophy in 2018 and was a finalist three other times. He took home the King Clancy trophy this season.

Selected in the eighth round in 2004, Rinne’s is one of the best draft stories in history. Originally eligible in 2001, he was passed over three times before the Predators took a chance on him at 258th overall. Janne Kekalainen, the team’s European scout, saw Rinne playing as a backup for Niklas Backstrom in Finland, and convinced GM David Poile to spend a late pick on the overager.

Rinne was a pending unrestricted free agent this summer, and though he indicated at the end of the season he might be interested in playing, even if it meant suiting up for another franchise, he’ll finish his career playing for only Nashville. The team now turns to Vezina candidate Juuse Saros while also having top prospect Yaroslav Askarov in the pipeline after spending the 11th overall pick on him in 2020.