The Florida Panthers have bought out one defenseman and signed another. Pierre LeBrun of The Athletic reports that the Panthers have signed Gustav Forsling to a three-year extension. The contract will carry an average annual value of $2.66MM and carries Forsling into unrestricted free agency. PuckPedia gives the full breakdown: 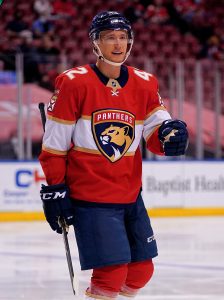 A move like this signals how the Panthers intend to approach the upcoming expansion draft, as the earlier buyout of Keith Yandle opens up a protection slot for another defenseman. Forsling will surely be that defenseman after passing some of the more veteran options on the depth chart this year. In 43 games, Forsling registered 17 points and averaged 20 minutes a night, more than Anton Stralman, Radko Gudas, Markus Nutivaara, or Yandle. He, Mackenzie Weegar and Aaron Ekblad were the three options that head coach Joel Quenneville leaned on the most, and Forsling is getting nicely rewarded for his strong play.

Throughout his career to this point, Forsling has only ever signed two-way contracts, earning less than $900K in the NHL. This deal is worth nearly three times that much, but does buy out one year of unrestricted free agent status. The question now becomes who will Forsling play with, as Brandon Montour is an unrestricted free agent and one of the other veteran options will likely be snagged in the expansion draft.

The Panthers have several other key free agents to sign, including RFAs Sam Bennett and Anthony Duclair. Things will be busy for GM Bill Zito and his staff, who also have to navigate an expansion draft, an entry draft and unrestricted free agency in the next few weeks.