The Columbus Blue Jackets may have traded Seth Jones, but they’re adding quite a bit of young talent to the blue line. After acquiring Adam Boqvist from the Chicago Blackhawks, the Blue Jackets have also nabbed Jake Bean from the Carolina Hurricanes in exchange for a second-round pick. The 44th overall selection, it was one of the picks that they received for Jones. 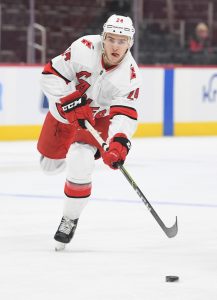 Bean, 23, was left unprotected by the Hurricanes in the recent expansion draft, but seemed to avoid a move when the Seattle Kraken decided to take Morgan Geekie instead. Instead, it only kept him in the Carolina organization for a few more days. He’s off to Columbus to negotiate his next contract as a restricted free agent, where there is suddenly plenty of playing time available.

That’s not something Bean is used to. The young defenseman was selected 13th overall in 2016 and has been stuck behind a deep defensive group in Carolina for years, despite dominating at the minor league level. In 2018-19 he recorded 44 points in 70 games as an AHL rookie, winning the Calder Cup in the process with the Charlotte Checkers. The following year he was given the Eddie Shore Award as the AHL’s best defenseman, scoring 48 points in 59 games to lead all players at the position. Despite that success, Bean received just two games of NHL experience before the 2020-21 season.

This year he stepped into a full-time role in Carolina but was still given limited minutes, averaging just 14:32 through his 42 appearances. He scored 12 points, including five on the powerplay, but rarely saw the ice at even-strength as the Hurricanes relied on Jaccob Slavin, Brett Pesce, Dougie Hamilton and Brady Skjei to soak up the 5v5 minutes. In Columbus, he’ll likely be given a much bigger chance to show what he can do as they look to build a new identity in the post-Jones world.

For Carolina, the move will raise some eyebrows, given the fact that Hamilton is a pending UFA. It’s not that Bean could directly replace him if he decides to sign elsewhere, but he at least is capable of providing some of the offensive upside that the group will be lacking. Of course, there would have been the issue of his RFA contract, and perhaps Bean was asking for more than the Hurricanes were willing to give. At any rate, they’ll now have to fill out the depth chart with other names but at least have an extra second-round pick to show for it.