The New York Rangers have a new president and GM in Chris Drury, and he’ll get to handpick his next coach. The team has fired David Quinn and most of his assistants, opening the role up for a new coaching search that will begin immediately. 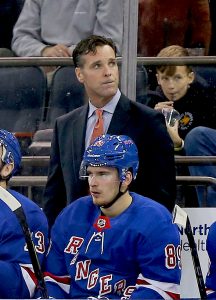 Quinn, 54, was only behind the bench for three seasons with the Rangers and had two years left on his contract. The team will still have to honor that but will go in a different direction after missing the playoffs once again. David Oliver, Greg Brown, and Jacques Martin were also relieved of their duties, with only goaltending coach Benoit Allaire avoiding the culling.

Drury, who was installed as the new front office head after a shocking firing spree earlier his month, will now have to find the team to lead his new vision of the team. There are certainly several qualified candidates on the market, with Elliotte Friedman of Sportsnet noting just yesterday that Mike Babcock, John Tortorella, Bruce Boudreau, Gerard Gallant, Claude Julien, and others are available. Rick Tocchet also recently parted ways with the Arizona Coyotes and is expected to be taking interviews today, while others like Travis Green in Vancouver are still without contract extensions for next season.

The Rangers finished 11 points behind the New York Islanders for the final East Division playoff position, but would have made the postseason in two of the other divisions with their 27-23-6 record. Many believe this season was actually a strong step forward for the group, but chairman James Dolan didn’t agree, firing president John Davidson and GM Jeff Gorton earlier this month. Dolan explained at the time the move was made so that Drury could be in place for the exit interviews, which have obviously led to him going in a different direction behind the bench.

Under Quinn, the Rangers were 96-87-25 overall but failed to qualify for the playoffs. In last year’s bubble, they lost all three games in the qualification round.