Trade speculation will always follow Matt Dumba. The Minnesota Wild defenseman has been in the rumor mill for years and after the team signed Jonas Brodin to a seven-year extension in September, things heated up again. Today, speaking with reporters including Tom Gulitti of NHL.com, Minnesota GM Bill Guerin made it clear that he is not shopping Dumba:

I’m prepared to start the season with him, and we really like that. He’s a good young player. He’s got good energy. I love his competitiveness. Our defensive corps, I’ll put them up against anybody’s. 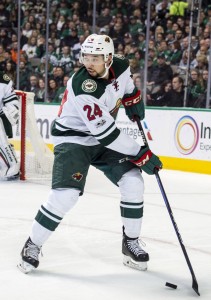 Of course, some will read that quote and see that Guerin didn’t commit to holding Dumba all the way through the season. Even though the team has the cap space to keep all of their high-priced blue liners through the entire 2020-21 campaign—Dumba, Brodin, Ryan Suter, and Jared Spurgeon combine for a $25.3MM cap hit—something waits at the end of the road that may force them to complete a trade.

The Seattle Kraken will join the NHL as the league’s 32nd team in 2021 and they will have an expansion draft after the upcoming season to build the core of their team. The Wild, like every other team in the league (save for the Vegas Golden Knights), have a chance to protect several roster players from selection. The problem for Guerin is that teams are either allowed to protect seven forwards and three defensemen or eight skaters. Going the normal 7/3 route would mean Dumba is left unprotected, given the no-movement clauses that the other three hold (Brodin’s new contract added an NMC onto the final season of his last deal). Protecting eight would leave the team’s forward group a little more vulnerable, though it still may be the better option if a trade isn’t reached before the expansion proceedings.

Expansion concerns shouldn’t be new to Minnesota fans. When the Golden Knights entered the league, the Wild made a deal with them to select Erik Haula, trading them Alex Tuch for a third-round pick in the process. Dumba was the main reason for that move as he was left exposed (along with others like Eric Staal and Marco Scandella) but essentially protected through the deal to select Haula, who was a restricted free agent that the team was going to have trouble signing. It was obviously tough watching Tuch become a strong contributor in Vegas, scoring 20 goals and 52 points in 2018-19—it would be troubling to see the team have to do something similar this time around.

In the same interview, Guerin also explained that the Wild will be naming a new captain before the season begins. Mikko Koivu, who had worn the “C” for more than a decade in Minnesota, was let go this offseason and signed a one-year deal with the Columbus Blue Jackets.