This fall, the Carolina Hurricanes traded away Joel Edmundson before watching Trevor van Riemsdyk and Sami Vatanen head to unrestricted free agency. For most teams, losing three NHL defensemen over a few weeks would leave them scrambling for answers, but the Hurricanes still have one of the deepest groups in the league. Jaccob Slavin, Brady Skjei, Jake Gardiner, Brett Pesce, and Haydn Fleury are all under control for at least three more seasons, while names like Jake Bean continue to push for playing time in the minors. 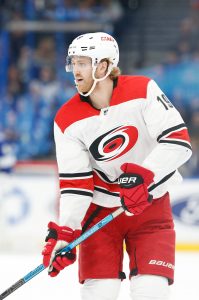 Even that would be an impressive depth chart, but it doesn’t include perhaps the best defenseman in Carolina. Dougie Hamilton, who was a frontrunner for the Norris Trophy before he suffered an injury last season, is heading into the final year of his contract with the Hurricanes and is scheduled to become an unrestricted free agent in the 2021 offseason.

That’s something the team hopes to remedy in the coming weeks, as Tom Gulitti of NHL.com reports. Hurricanes GM Don Waddell told Gulitti that the team hopes to sign Hamilton to an extension before the upcoming season begins, explaining that though they haven’t started talks yet, they plan to soon after Hamilton arrives back in Carolina later this week.

A contract extension for Hamilton would certainly be an expensive one, even if he does have a somewhat checkered NHL past. Originally selected ninth overall in 2011, Hamilton has already been traded twice in his career, first from the Boston Bruins to the Calgary Flames and then to Carolina in 2018. That movement has come despite him being one of the best offensive defensemen in the entire league, almost since day one.

Over the last six seasons, which includes his final year in Boston, Hamilton sits 16th among all NHL defensemen in scoring with 258 points in 446 games. That rank increases to fifth if you sort by goals, as the right-handed defenseman trails only Brent Burns, Oliver Ekman-Larsson, Shea Weber and Roman Josi in that category. The fact that offensive production comes paired with elite possession numbers and an ability to play in all situations make Hamilton one of the most valuable defensemen in the league.

The question is, whether the Hurricanes can afford a substantial raise on his $5.75MM cap hit. That depth mentioned earlier could potentially make that difficult, given the team already has four defensemen making at least $4.025MM per season for the next three years. The team also needs to consider that Andrei Svechnikov will be demanding a huge raise when he becomes a restricted free agent after this season, plus neither of their goaltenders are signed through 2021-22.

On that defensive note, Waddell also confirmed that they haven’t actually closed the door on bringing back Vatanen, who still hasn’t actually signed anywhere this offseason. The veteran defenseman was traded to the Hurricanes at the deadline, didn’t get into a single regular season game before the season was shut down, but then played big minutes for the club in the postseason. Vatanen is one of a handful of capable defenders still gauging the market, but Carolina has told him they still think there is a “good fit” for him with the Hurricanes.