The Vegas Golden Knights have inked one of their restricted free agents, signing Keegan Kolesar to a two-year contract. The deal carries a $725K average annual value at the NHL level. 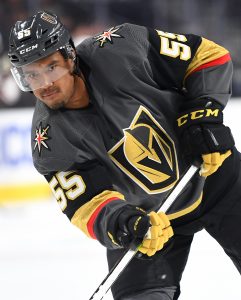 Kolesar, 23, came to the Golden Knights in one of the franchise’s first post-expansion draft trades back in 2017. The team used a recently acquired second-round pick to bring the power forward over from the Columbus Blue Jackets organization just after he posted a WHL-leading 31 points in the Seattle Thunderbirds playoff run. He was a nearly unstoppable force for the Thunderbirds that season and obviously one that made an impression on the Golden Knights staff. That pick, it turns out, was used by the Blue Jackets to select Alexandre Texier, who has already established himself as a full-time NHL option.

That can’t be said about Kolesar, who has just a single NHL game under his belt as he heads into his fourth professional season. The 6’2″ 227-lbs winger did score 20 goals in 2018-19 for the Chicago Wolves but took a step backward offensively this year by finding the back of the net just three times. While his offense was never his real calling card, if Kolesar is to ever really become an impact player for the Golden Knights he’ll have to find a little more consistency at that end of the rink.

For now, he represents a hard-working, physical presence that could be inserted into the bottom-six as early as this season. As the Golden Knights continue to work around huge monetary commitments to players like Mark Stone, Max Pacioretty, Marc-Andre Fleury and now Alex Pietrangelo, they will always have the need for inexpensive fourth-line options. At the league minimum for the next two years, Kolesar represents just that, even if he doesn’t have a lot of NHL experience to this point.