After the Pittsburgh Penguins announced they had relieved AGM Jason Karmanos earlier today, they now have brought in a new (though familiar) face to the front office. Trevor Daley, who won the Stanley Cup with the team in both 2016 and 2017, has decided to retire and join the organization as a hockey operations advisor. Daley had played the last three seasons with the Detroit Red Wings, but will now hang up his skates and put on a suit. Penguins GM Jim Rutherford released a statement on the hire: 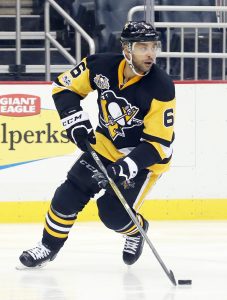 First, I would like to congratulate Trevor on an incredibly successful 16-year career. In addition to being a Stanley Cup Champion with us, he left us with a great impression due to his professional demeanor and quiet leadership qualities. Those traits, along with his desire to want to learn about the business side of the NHL, made him a great candidate to join our staff.

Daley, 37, played more than 1,100 games in the NHL, suiting up for the Dallas Stars, Chicago Blackhawks, Penguins, and Red Wings. A smooth-skating defenseman that could contribute at both ends of the rink, he racked up 309 points in 1,058 regular season contests including a career-high 38 in the 2014-15 season. After winning his second title with Pittsburgh in 2017 he signed a three-year, $9.5MM contract with the Red Wings, but dealt with several injuries and ended up playing in just 164 games with the team.

With the Penguins, Daley will assist with player evaluations and serve as an “eye in the sky” for the coaching staff during games. While this is just the beginning of his post-playing career, it does provide the Penguins with another set of hands in what had recently become quite a thin front office.