The San Jose Sharks have brought back a pair of familiar faces, signing Patrick Marleau and Matt Nieto to one-year contracts. Chris Johnston of Sportsnet reports that Marleau has signed for just $700K, while Curtis Pashelka of Bay Area News Group adds that Nieto will also earn just $700K. 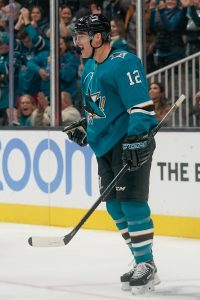 Marleau is obviously a franchise icon and is now just 45 games behind Gordie Howe for the all-time lead in NHL games played. He should break that this season if healthy and could eclipse 1,600 games with the Sharks. San Jose GM Doug Wilson explained why they are bringing the 41-year-old back:

Patrick is one of the most iconic players in San Jose Sharks history, as well as being one of the most respected veterans in the National Hockey League. The leadership he brings on and off the ice has been well documented over his fantastic NHL career and his competitive fire to win is still burning strong. Patrick’s lead-by-example demeanor is inspiring and continues to resonate with our group of younger players.

The veteran forward leads the Sharks in almost every record thanks to his two decades in the uniform, starting way back in 1997-98. One of the most consistent offensive players in the NHL over his years, father time has finally started to catch up with him. In 2019-20 he scored just ten goals and 20 points in 58 games for the Sharks before a deadline deal to the Pittsburgh Penguins. Marleau had two points in eight games down the stretch and was basically invisible during the Penguins’ qualification round loss.

Nieto too should be comfortable in San Jose, having played parts of four seasons there to start his NHL career. The 27-year-old actually recorded his career-high in points with San Jose back in 2014-15, scoring 27 in 72 games that season. Though he’s not a top-six contributor, Nieto does have a little scoring punch to add some depth to the lineup and now has plenty of playoff experience.

Neither player will push the needle very far for the Sharks, but come with absolutely no risk at their league-minimum salaries. Marleau does not have trade protection in his deal.