Though there were rumblings about it a few weeks ago, today it became official. Mike Green has announced he will retire from a long professional playing career, telling Tarik El-Bashir of The Athletic that he is set to hang up his skates and focus on other parts of his life. Green, who spent 15 years in the NHL, is focused still providing a positive impact on those around him: 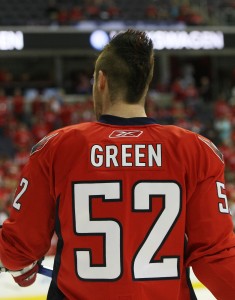 A lot of people are hurting, and I want to help. I want to use my voice in a different way. I want to focus my energy differently, ground myself in the community, in family. But I also want to become a change agent for good.

A veteran of 880 regular season games, Green was once one of the finest offensive defensemen in the entire NHL. During the 2008-09 season, he tallied 31 goals in just 68 games, a threshold that not many defensemen have ever reached. In fact, only four defensemen have ever scored more goals in a single season—Paul Coffey, Bobby Orr, Doug Wilson, and Kevin Hatcher. Green was the first to complete the feat since Hatcher in 1993, and no one else has done it in the decade since.

But Green was more than just a goal-scorer for the Washington Capitals. He recorded back-to-back seasons of at least 73 points and routinely averaged more than 25 minutes of ice time a night. He finished second in Norris Trophy voting twice, losing to Zdeno Chara and Duncan Keith, while also receiving votes for the Hart. In the second part of his career, he transitioned to the Detroit Red Wings, where he was still an excellent puck-mover and actually improved the defensive side of his game. By the time he ended up in Edmonton at this year’s trade deadline, however, he wasn’t anywhere near the high-flying Green from the Capitals.

Green likely won’t go into the Hall of Fame, but he’s certainly in the mix for the Hall-of-Very-Good. The 34-year-old will retired with 501 points, putting him 69th on the all-time list among defensemen.