The hockey world is in mourning today as Dale Hawerchuk passes away at the age of 57 after a long battle with cancer. His son Eric announced the news on Twitter, receiving an outpouring of support from all around the hockey community. 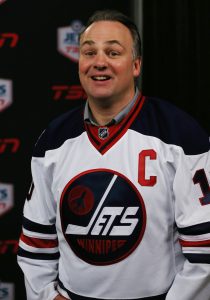 One of the greatest, and perhaps most underrated players of all time, Hawerchuk played 16 years in the NHL. In 1,188 career regular season games he scored 518 goals and recorded 1,409 points, good for 20th on the all-time list. Though his Winnipeg Jets were routinely ousted from the playoffs by powerhouse Smythe Division opponents, there was never any doubt in Hawerchuk’s status as one of the game’s greats.

A Calder Trophy winner in 1982 after scoring 45 goals and 103 points as a rookie, Hawerchuk would record five more 100+point seasons in his career. A mid-career move to the Buffalo Sabres made him one of the greatest for two franchises, while he finished things with time in St. Louis and Philadelphia.

In his post-playing career, Hawerchuk had been a long-time head coach of the Barrie Colts of the OHL and was inducted into the Hockey Hall of Fame in 2001.

From everyone at PHR, we wish the best for the Hawerchuk family and mourn the loss of one of hockey’s giants far too early.