January 24: If the Maple Leafs are still interested, they’ll have to deal with another obstacle. James Mirtle of The Athletic tweets that Brodie has Toronto on his eight-team no-trade list. Mirtle explained himself further on TSN radio today, suggesting that Brodie changed his list to include Toronto after learning of their interest, in order to have some more control over his playing destination.

January 21: Last offseason, the Flames had a deal in place with Toronto that would have seen defenseman T.J. Brodie go to the Maple Leafs as part of a package for center Nazem Kadri but Kadri admitted to using his partial no-trade clause to nix that deal.  It certainly seems as if this isn’t the only time that Calgary has made Brodie available as Sportsnet’s Eric Francis reports that they’ve been trying to trade him for a while. 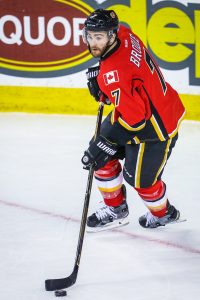 The 29-year-old is having a quiet year offensively with just a single goal and 13 assists through 44 games this season.  However, he came into the year with at least 31 points in each of the past six seasons so there should be teams that think he could rebound for the stretch run.  He also is a fixture in their top-four and has been for several years now so as far as impact defensemen go, he certainly is one of the better ones available and should generate a fair bit of interest over the coming weeks.

Brodie is one of two prominent unrestricted free agents on their back end along with Travis Hamonic who Francis adds that Calgary views as untouchable.  With the Flames already having more than $64.5MM in commitments to just 13 players next season and the recent extension for Rasmus Andersson, it certainly seems unlikely that they will be able to keep both Brodie and Hamonic around.

To that end, GM Brad Treliving appears to have decided that moving him for something now is more desirable than keeping him for a potential playoff run and then likely losing him for nothing on the open market.  Calgary recently freed up $4.3MM off their books with the Michael Frolik trade and with Brodie carrying a $4.65MM AAV himself, they could certainly be a factor in discussions for just about anyone between now and next month’s trade deadline.